Take this “best of” list with a grain of salt

NextAvenue.org, a web site sponsored by the Public Broadcasting System (PBS), provides lots of helpful information for retirees and those contemplating their post-career lives.  Helpful or not, the site publishers couldn’t resist falling into the common Trap of the Lists.  (You know, Best Of This or That Lists.)

NextAvenue has just published a list of the Fastest Growing Places to Retire, first developed at NerdWallet.com, a site dedicated to financial advice.  Crunching selected data from the U.S. Census Bureau, NerdWallet compared the population growth of 65+ residents in cities across America to determine which had the fastest growing older population. 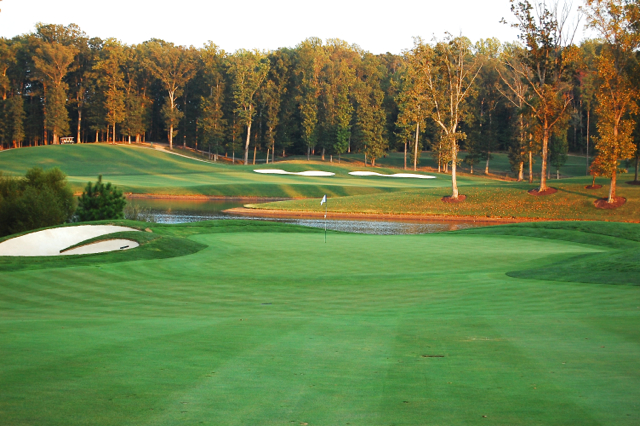 Many golf architecture afficionados believe Lester George's design at Kinloch,
outside Richmond, is the best in the state of Virginia.

The list includes a number of surprises, in addition to the surprise at why NextAvenue thought old person population growth would be an attraction to old persons.  In almost a decade of assisting people to find a golf home in the South, most of them retirees, I have never been asked by anyone to identify a city with a vast number of folks 65 and older.  A few customers have requested age-restricted communities (55 and older) in order to live among people their own age, but they don’t care if the surrounding county is old.  And the vast majority of retirees want to be among a diverse demographic composed of families, near retirees and others.  No God’s Waiting Room for them.

There is no surprise that the number one fastest growing city for old people is Phoenix.  Always a magnet for retirees because of the warm weather, Phoenix real estate prices plummeted during the recession but have made a strong comeback since.  You could say the same for Las Vegas, the 3rd fastest growing city for retirees; and number two Portland, OR’s mild climate, excellent healthcare and a vibrant lifestyle seems to attract everyone, young and old.

At number four, Detroit is something of a surprise as it has been losing overall population for years.  Perhaps the fact that retirees in the area have lost so much of their home values that they cannot afford to move elsewhere accounts for the skewing of the population to the older end of the spectrum.  The South and Southwest solidify positions five through nine on the list with, in order, Raleigh, Atlanta, Tucson, Jacksonville, FL and Richmond.  (We’ll ignore #10 Grand Rapids, MI.)  Raleigh is popular because it is surrounded by major universities with major medical schools and hospitals; and the climate supports year round golf.  Jacksonville, although in Florida, tends to have a more temperate climate than the rest of the state, and it offers plenty of big city services, including a professional football team (but not yet a very good one), without feeling like a big city.  The surrounding golf communities, including out on Amelia Island, provide a nice alternative to other coastal areas (and, for those who need it, no state income tax).
We have long scratched our head about Richmond, which hasn’t exactly seemed like a magnet for retirees but features all the services retirees would want (although the city’s golf communities seem to have grown more organically than in other areas of the South, more like neighborhoods than planned developments).  Probably the best golf course in the state, Kinloch, is just outside of Richmond and across the street from a 36-hole private golf club in a community called Hermitage.

If you are contemplating a move South, please fill out our Golf Homes Questionnaire online.  It takes about 10 minutes, and once we have your requirements, we will suggest some golf communities that match up.  There is no fee for our services.  Click here for the GolfHomesQuestionnaire.

More in this category: « March Newsletter Features Value Plays, Homes at $120 per square foot and less For hidden value, peek under the carpeting »
back to top
Back to Top