Matter of Altitude: Getting high could be the best way to beat summer heat in the South
Friday, November 8, 2013

Matter of Altitude: Getting high could be the best way to beat summer heat in the South

Every so often I slip into my meteorologist’s mode, scanning the weather history of various towns in the Southeast in behalf of customers or just for my own idle curiosity. My latest excursion into the world of weather was to identify cool summer golf homes for a couple currently living full-time in Port St. Lucie, FL. Like many Floridians, they are looking for summertime relief from the relentless 90-degree-plus days in the Sunshine State.

To be a meaningful change, daytime highs and nighttime lows should average at least 6 to 10 degrees cooler up north. July is the base measure since it is the hottest month virtually everywhere in the continental U.S.

I was shocked to find that a distance of 670 miles from Port St. Lucie to Wilmington, NC, did nothing at all to change the July temperature profile. According to Weather.com, Wilmington’s July average temperatures are exactly the same as Port St. Lucie’s -– 90 high and 75 low. Looking at various spots along the Carolinas coasts did little to improve the outlook: Pawleys Island, SC, is even slightly warmer, 91 high and 75 low; Ocean Isle Beach, NC, just over the state line from North Myrtle Beach, is only marginally better during the day, at 89, but balmier at night, 71. Even in Kitty Hawk, where the Wright Brothers counted on the predictable ocean winds on the Outer Banks to help their invention soar, the daytime average high in July is 88 and the average low is 73. (Note: Humidity readings in many of these spots is lower than in Florida, perhaps making it feel somewhat cooler.) 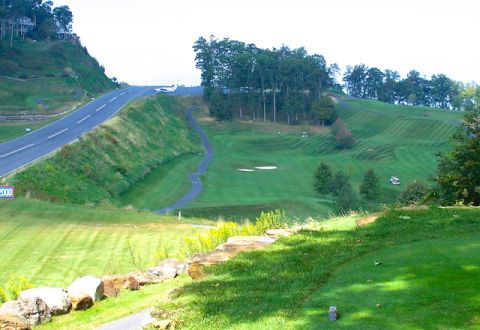 It can be downright frigid on summer nights at 4,000 feet up at Mountain Air in Burnsville, NC.  Not surprisingly, the community is a favorite among pilots looking for a place to relax.

I turned inland for relief, but that was something of a fool’s errand. Aiken, SC, to which 19th Century Charlestonians fled the city’s summer heat and malaria outbreaks, is even hotter in July than are many Florida towns, with an average high of 92 degrees. Greenville’s average high is 90, but the 70-degree average low is one of the more temperate standards I found below the highest elevations.

As expected, you really need to get up there in terms of altitude to get down there in terms of temperature. Asheville, NC, for example, at around 2,000 feet, posts an 85-degree high in July and a 65-degree low, almost sweater weather at night but no great break during the day. Burnsville, which is about a half hour from Asheville and a few hundred feet higher in elevation, has one of the nicest July climates anywhere, at 79 degrees and 61 degrees respectively. (Count on a few degrees lower at the highest levels of Mountain Air, a Burnsville golf community whose mountaintop features an airplane runway.) I didn’t check, but we can expect that many of the other areas of western North Carolina –- Brevard, Flat Rock, Cashiers, Maggie Valley –- all have high temperatures in the low-to-mid 80s in July. 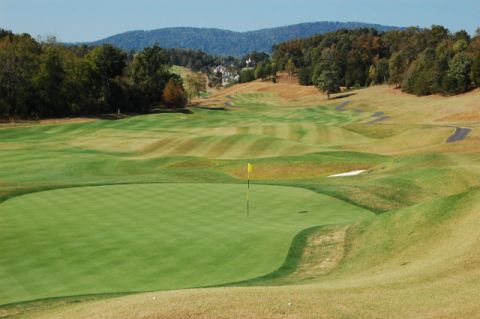 The community known as Glenmore, in Keswick, VA, is surprisingly temperate in summer, given that it is more in the foothills than the mountains.

I investigated a few other golf-oriented areas whose historical July temperatures surprised me somewhat. Fairfield Glade, a couple of hours west of Knoxville, TN, and known as “Tennessee’s Golfing Capital,” showed average July highs and lows of 84 and 65. There’s a good reason for its relatively low temperatures; the Cumberland Plateau, on which the town and sprawling community sits, rises to 2,000 feet. Keswick, VA, is home to Glenmore, a golf community of mostly brick homes, not surprising for a development just a few miles from Thomas Jefferson’s Monticello and the University of Virginia in nearby Charlottesville. At an elevation of only 450 feet, Keswick’s July readings are surprisingly moderate at 84 and 67, respectively. On the other side of Charlottesville, about 45 minutes west, the Wintergreen Resort rises to more than 4,000 feet in the Blue Ridge Mountains; its Devils Knob golf course at the top of the mountain is an ego booster in terms of driving distance, since the air at almost ¾ of a mile up is thinner. Although the nearby valley town of Nellysford has historical July average highs and lows of 88 and 67, respectively, temperatures up the mountain are considerably cooler, almost 10 to 15 degrees lower at the summit. That is the place to be during the dog days of summer…

…and, if you are a skier, during the coldest days in winter. Not surprisingly, Wintergreen becomes a ski resort in winter, although during a few days in January, you can ski in the morning and play golf in the afternoon at the resort’s Rees Jones course at the base of the mountain. It is a good place for those who both ski and play golf to get high on life. 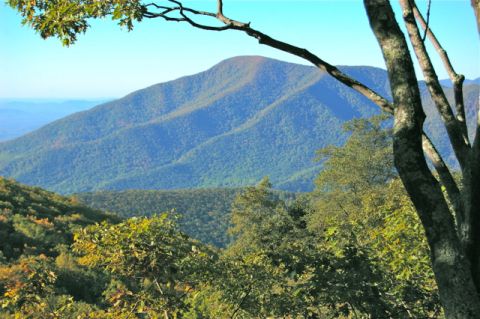 Your editor and his family rented a cabin at the ski and golf resort community Wintergreen a few years ago; this was the view from the deck.

More in this category: « Ugly homes show their appreciation Car ownership costs indicate little about overall state taxes »
back to top
Back to Top