Golf for all tastes in California Wine Country
Wednesday, August 21, 2013

Golf for all tastes in California Wine Country

My family and I attended our niece’s wedding in California’s Sonoma Valley last week, giving my son Tim and me enough time in the days before and after the ceremony to play three of the finest golf courses in the valley: one legendary and strictly private golf club, another private club that permits guests from a local hotel to play, and one municipal golf course that was a pleasant surprise.

Top 100 course has its ups and downs

The ultra-private Mayacama Golf Club -– a non-resident “national” golf membership is priced at more than $100,000 -- is built along the side of one of the mountains that separates the Sonoma Valley from Napa Valley. Fractional (1/10th) ownership is available in adjacent “casitas” and is priced around $250,000, which includes club membership; just 31 home sites surround the golf course, some of them converted into $3 million-plus homes. Mayacama is a breathtaking piece of property that took my breath away many times as I trundled up a few dozen steps to get to one of the course’s many elevated tee boxes. Our caddy, Jeremy –- the club is walking only -– said that the average walk on the course is seven miles, if you factor in all the trips up to and down from the tees. It’s a good walk for exercise freaks, but I found my 65-year-old lungs required a few extra minutes to re-oxygenate, but we had plenty of time for that (see below). 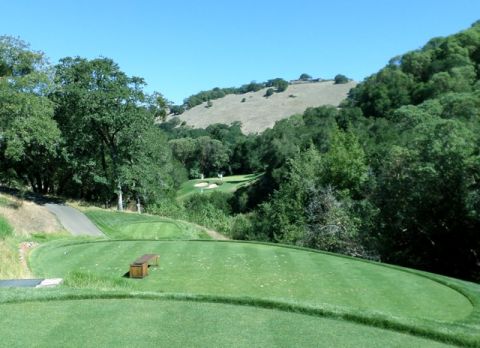 The par 3s at Mayacama are not especially long, but they need not be, perched as they are on the sides of slopes, as is #3.

Mayacama is Jack Nicklaus at his surliest…and best. The golf course, with a rating of 71.5 and slope of 139 from the 6,302-yard “Plates” tees, was ranked 82nd best in the U.S. in Golf Digest’s latest rankings, and we saw nothing to disavow a solid top-100 ranking. Virtually every shot from the tee boxes, the layups on the reasonably distanced par 5s (none over 525 yards from the middle tees) and the approaches on the par 4s must be placed in the appropriate position in order to avoid troubling internal debates about safe versus risky. The greens are either elevated, with rather steep falloffs to the chipping areas or bunkers below, or feature false fronts that will trap a short approach well below the pin or, worse, send the ball back down below the green. Cut into mountains

and a canyon-like valley, the contrast between the brown mountains, green fairways and ubiquitous blue sky seems out of a Mondrian painting, and the views from virtually ever spot on the course are postcard perfect. The elevated greens were on the firm side, probably because of their draining properties as well as a dry summer, and they were as fast as you would expect an ultra-private club’s greens to be. Jeremy was especially helpful in reading putts; left to our own devices, it would have been late into the round until we figured out that most putts broke southeast, toward the town of Sonoma.

Mayacama opened in 2002, a time when Nicklaus was still stamping many of his fairways with his signature trees, even if that means mid-fairway; if your drive finds the right side of the fairway on the par 5 finishing hole, for example, the tree between the edge of the lake and fairway virtually forces a second shot over a good stretch of water because playing to the other side of the tree -– the “safe” side -- will leave a long third shot to the green, all carry over water and a greenside bunker.

The knee-stressing walks from tee boxes to fairways at Mayacama were not the only downs of the day. On a hot day in the valley, our round was one of the longest in years, just over five hours. Yes, the course is difficult and not for the faint of heart, and as I wrote earlier, it took me a few minutes to catch my breath after some walks between shots. But we waited on virtually every shot from tee box and fairway, sometimes as long as five minutes; the group in front of us took an inordinate time on the greens, but they did not fall behind the group in front of them. If I were a member, I would be none too pleased. The temptation is to echo Twain and say our day at Mayacama was a hard walk spoiled, but the course is so challenging, so nicely tended by its greens keeping staff and so much fun to play, that we will just say it was worth the waits.

Combo tees not too long, not too short, just right

Sonoma Golf Club is a much more tame golf course in no less excellent condition than is Mayacama, but it will appeal more to those who enjoy a mild challenge (and mild exercise on the relatively flat golf course). The course was designed originally by Sam Whiting in 1928 and, besides its members, is open only to guests of the Fairmont Sonoma Mission and Inn Resort. Both members and guests are well treated at the club; our bags were toted straightaway to the elaborate practice range, where perfectly white Pro V-1 practice balls awaited. Yardages to the practice pins were perfectly delineated, and an attendant stood by to respond to any requests and then to carry our golf bags to a waiting cart near the first tee. 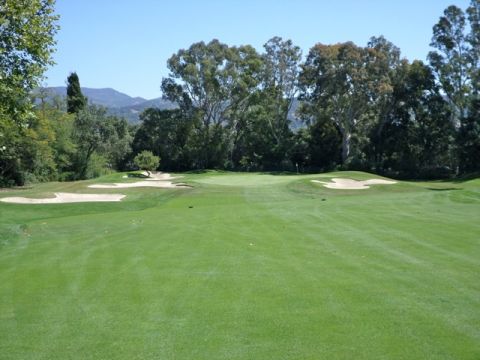 On some greens, the lush grass, false green fronts and tucked away pin positions make it inadvisable to consider running a shot up to the putting surface, although it looks tempting.

Those who don’t know the Sonoma course will find it easy to walk or ride and without too many surprises (e.g. no blind shots). Most of the layout is rather straightforward –- in both senses of the word –- with just a few mild doglegs and a predictable three greenside bunkers on all but a few holes. I stood in a number of fairways setting up for approach shots thinking, “Haven’t we been here before?”

Still, the routing was unique in my experience, the first nine running around the very edge of the property and the inward nine forming a counterclockwise spiral, more or less, on the interior of the layout. You might think that the nine that ran around the outer edge would be longer than the interior nine, and it is, but only by about 45 yards. The advantage of the cyclonic routing is that holes on the outward nine run in every compass direction, providing differing wind conditions and a wide variety of orientations against the mountain backgrounds. Okay, it’s a bit esoteric, but according to club staffers, Sam Snead, who played many hundreds of golf courses in his time, declared Sonoma one of his favorites.

Sonoma does one thing I especially appreciate and would like to see at more golf clubs. They create a fifth set of tees by combining holes from the blue tees -– total 6,679 yards –- and the white tees -– total 6,158 yards, thus creating a course of 6,341 yards. (They even provide a separate, cute little scorecard just for the combo-tee layout.) So many times I play golf courses in which the blue tees are a little long for my 210-yard drives and the white tees a little wimpy. I find that for me and many of my fellow baby boomer golfing friends, 6,300 seems the perfect yardage; at Sonoma, the men’s combo tees -– eight contributed from the blue-tee set and 10 from the white tees –- carry a rating of 71.3 and slope of 134. (The slope rating for the blue tees is 135.)

The biggest surprise of the week was the public Windsor Golf Club, whose layout was more interesting than Sonoma Golf Club’s and with turf conditions that were almost the private club’s equal. Once away from the busy pro shop and practice area and the loudspeaker announcements of the next three groups on the first tee -– they mangled my last name, naturally –- the course was delightful. The club, which is abutted by nicely designed condos –- timeshare units, I was told -– is accessible to Highway 101, the major north-south route out of San Francisco, which is 70 miles away. This is the heart of Sonoma wine country, and many large and small, family-run wineries are within 10 minutes of the golf course. 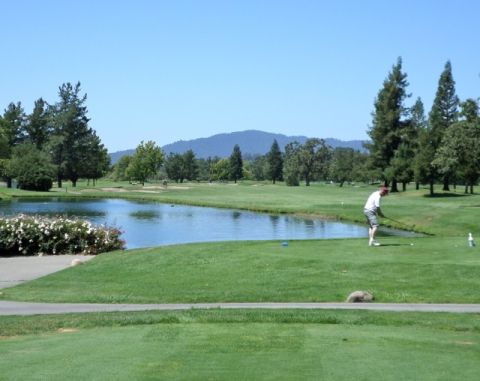 Water does come into play on a few holes at Windsor Golf Club, although there is virually always a safe way around.

The Windsor Golf Club layout included more in-play water than the two private clubs, but that didn’t add time to our round; we finished in about 4 hours 15 minutes, more than passable on a Wednesday when there were groups that started eight minutes ahead and behind us. A starter at the first hole kept things spaced nicely. I can’t say that Windsor played especially difficult, with a rating from the 6,143 yard men’s tees of 70.3 and slope of 127; the excellent condition of the greens, which were easy to read and putt, helped. But the variation of hole layouts was excellent, affording the opportunity to play most clubs in the bag and

providing different approaches to well protected greens. I was also impressed that, on a municipal course like Windsor, daily-fee golfers and members seemed to repair most of the pitch marks on the greens. That was especially refreshing given that Windsor is so reasonably priced; I paid green fees of $27 (senior rate) and a cart fee of $15 (the course is certainly walkable). Such low rates may make golf memberships superfluous, but for those who intend to play three or more times a week, the monthly fee for a couple is $301 based on a yearlong commitment; keep in mind that the course is open all year and the mercury rarely dips below the 50s in winter.

The streets that run perpendicular to one side of the Windsor Golf Club property are named 1st Hole Drive, 2nd Hole Drive, etc. right through to 19th Hole Drive where, appropriately enough, the club’s restaurant is located. Windsor Golf Club may be in the middle of wine country, but in its little corner of Sonoma County, it is all about golf.

More in this category: « Fear of Fleeing: If you love the coast, hurricane threat should not deter you Eat, drink and play lots of golf at New Jersey's Crystal Springs Resort »
back to top
Back to Top