The last three months of 2012 showed the greatest quarterly jump in U.S. home prices since the last quarter of 2005, according to the National Association of Realtors. Of the 152 metro areas tracked by the NAR, 133 indicated median price increases. A comparison of the end of 2012 with the end of 2011 showed a price increase of 10%.

Real estate investors do about face

The smart institutional money has been rushing into the residential housing market since last year, a sure signal of a rebound. Hedge funds and other large-scale investors are putting their resources where they think they have the most leverage. They are investing in homebuilding companies, foreclosed homes,

John Paulson, who made billions betting on a housing collapse, has bought enough land to build 25,000 homes.
companies that supply homebuilders and in land, some of it inside already developed golf communities. John Paulson’s hedge firm -– he is the legendary investor who predicted and bet on the collapse of the housing industry in 2008, making billions in the process –- has bought up enough land to accommodate 25,000 homes, according to a CNN MoneyInvest article.  Private equity firm Blackstone Group spent $2.7 billion in 2012 to purchase 17,000 homes from foreclosure. The prices of shares of publicly traded homebuilders like Pulte and Lennar have virtually doubled in the last year. And private developers like Taylor Morrison, which has built some golf communities, are so confident in the market that they have decided to go public.

If firms like these, with great research capabilities, think it is a good time to invest in the housing market and leisure residential properties, that should be good enough for those of us considering a similar, although vastly smaller, investment. 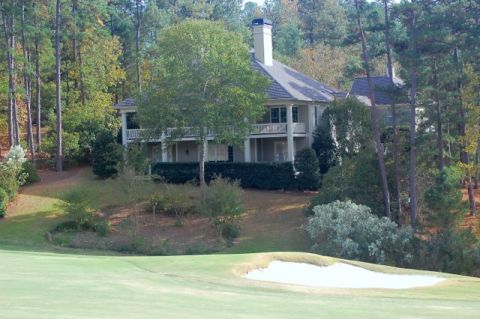 Home prices are beginning to move up at Reynolds Plantation now that deep-pockets MetLife owns the community and its six golf courses.

The big players seem to especially favor golf communities and other large-scale developments that already have their infrastructure substantially built. Big spenders like the Reynolds brothers at Reynolds Plantation in Georgia and Jim Anthony at Carolinas’ Cliffs Communities, who agreed to pay Tiger Woods a reported $20 million to design a golf course that may never be opened, spent hundreds of millions of dollars of their own and their banks’ money to build golf courses, pools, clubhouses, marinas, fitness centers and all the other facilities favored especially by baby boomers looking for a warm-weather retirement location with year-round golf. When Reynolds Plantation and The Cliffs entered their bankruptcies, why wouldn’t deep-pocketed firms like MetLife, which picked up Reynolds, swoop in with checkbooks open to pay pennies on the dollar? (At The Cliffs Communities, a consortium comprising wealthy property owners and outside developers pooled their resources to make the best offer for the briefly bankrupt string of golf communities.)

Time to buy?  Signals are there.

Smart money individuals tend to notice these bets. At Reynolds Plantation, for example, sales traffic is up after the new owners MetLife and their partners, Daniel Corporation, restructured the membership plans to offer a more flexible, and lower cost, menu of options to new members. Despite a large inventory of golf lots and resale homes for sale, selling prices have been moving up pretty steadily since the MetLife acquisition last August, according to Jere Mills, a longtime Reynolds sales agent. (For a selection of current golf homes for sale at Reynolds Plantation, click here. Or contact us for more information.) But given the dramatic drop in values during the community’s financial problems and follow-on publicity, a couple that could not have hoped to afford a home at Reynolds in 2004 has a chance at an upscale retirement there today. But that may not last too long as baby boomers on the sidelines rush to follow the examples of the big-time smart money. 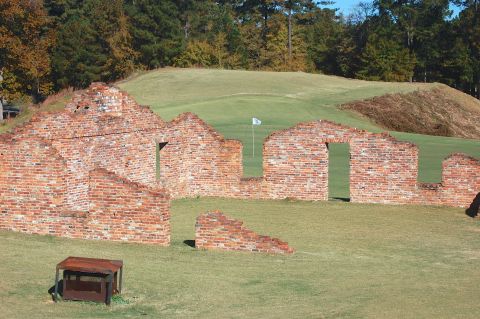 Revolutionary War relics provide landscape and historical context to the greens at Grand Harbor.  The golf community's fortunes are in anything but ruins now that the experienced Challenge Golf Group has taken over.

Despite rumors of their death, private golf clubs have also been the subject of big-investor interest the last couple of years. Developer Toll Brothers, for example, carved out a golf division to identify and purchase established golf clubs within easy driving distance of thriving population centers. In some cases, the golf clubs are inside the gates of golf communities, as is the case at the Toll Brothers Hazentree golf community, northeast of Raleigh, NC. Challenge Golf Group, a Texas-based firm that owns and manages 10 golf communities, made an aggressive incursion into the Carolinas over the last couple of years, swooping up the rarefied Balsam Mountain Preserve in Sylva, NC, and the less elaborate but attractive lakeside community of Grand Harbor near Greenwood, SC.

Because they were able to purchase the golf communities at deeply discounted prices, it is not likely these firms will goose up the prices for their undeveloped lots too quickly. And when you buy an asset for way less than you expect, you have a little more motivation to invest in upgrades -– not that many of the golf communities we mention above are in need of major upgrades after their founders poured tens of millions of their own and their banks money into the amenities. MetLife has begun to tweak the clubhouses and golf course grounds and won't let any of the infrastructure slide; they know how to protect their investments and want to ensure Reynolds gets its fair share as prices rise.

As the economy improves, as more and more baby boomers come off the sidelines and as confidence grows in the viability of some of the biggest golf communities, prices will rise naturally.  And they are likely to grow the fastest in those communities offering the most amenities, including multiple golf courses.

If you would like our thoughts about which golf communities in the southern U.S. best match your requirements, please fill out our online customer questionnaire (Click Here). After you submit it, we will get back to you in a few days with some initial recommendations about which golf communities best suit you.
Read 3895 times Last modified on Friday, 27 September 2013 11:29

More in this category: « Art Imitates Life: Golf still rules as the symbol of an active retirement Searching high (mountains) and low (coast) guarantees messy pursuit of golf home »
back to top
Back to Top