Every year, Atlas Van Lines publishes its “Migration Patterns” report based on the more than 73,000 households the company moved during the preceding 12 months. The recently issued report for 2012 shows Tennessee, North Carolina and Texas as the strongest magnets in the southern U.S. for incoming populations. Not surprisingly, many of the northeast and upper Midwest states continue to suffer net losses in population.

The Atlas Van Lines report throws all 50 states into one of three categories; inbound, outbound and balanced (no more than 55% inbound or outbound traffic). About 60% of North Carolina’s total moves were into the state, with Tennessee (57.5%) and Texas (56%) the only other southern

Paraphrasing Sally Fields' famous Oscar acceptance speech, people "really like" North Carolina as a place to call home.
states categorized as “inbound.” All other southern states were deemed “balanced.” Among those states that experienced more outward migration (“outbound”), Atlas reported New York at 58% outward, Connecticut at 57% and Illinois at 56%. From New Jersey up through New England, New Hampshire was the only state with more folks moving into the state via Atlas than out of state.  The moving company also does business in Canada and reported migrations by province; the majority of traffic in Canada was outbound. In Ontario, for example, 832 residents left the province via Atlas and 502 were moved into Ontario, a 62% outward total. 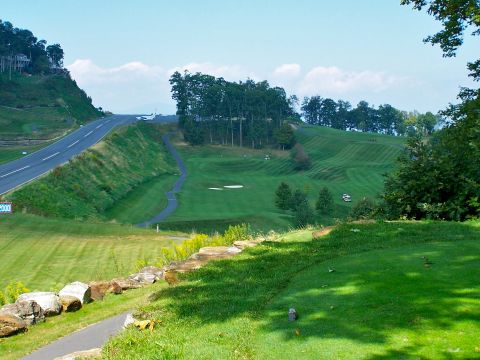 North Carolina has a lofty reputation with those moving to southern golf communities, and no golf community is loftier, literally, than Mountain Air near Asheville.  Mountain Air's airplane runway and golf course occupy the top of the 4,000 foot high mountain.

Florida, which is defined as a “balanced” state in the report, showed its second successive year of more inward than outward migration after five years of losing population. Those seeking a golf community or any other type of leisure residential neighborhood are finding the combination of low real estate prices and zero income tax to be a strong magnet once again in the Sunshine State.

If there was a “Population Magnet” Award, North Carolina would be in the running annually. The state has attracted more residents than it loses for well over a decade. In accepting the award, we could imagine the governor of North Carolina echoing those famous words of actress Sally Field at the Oscars many years ago: “You like me. You really like me.” Indeed they do North Carolina.  (For the 2012 Atlas Van Lines Migration Patterns map, click here.)

New residents are attracted to North Carolina for its wide range of topography and climates. Sun worshippers are drawn to Brunswick County’s beaches between Wilmington and Myrtle Beach, SC. Homes in the area’s golf communities range in price from the $100s to the high six figures, with an almost limitless variety of options in between. For example, one of our customers built a brand new home last year in the exquisitely organized Brunswick Forest in Leland for less than $300,000. Brunswick Forest features a stellar 18-hole golf course by Tim Cate, a native son of the area and one of its hot young golf designers. On the ocean side of Wilmington, the golf community known as Landfall offers true “boutique” golf with a total of 45 holes by Jack Nicklaus and Pete Dye, as well as the largest and most elegant homes in the area, with prices that begin around $400,000 and end well over $1 million. St. James Plantation, near the charming seaport of Southport, fits comfortably in between in terms of price range, although with four golf courses and plenty else to do, it takes a back seat to no other community in terms of amenities. 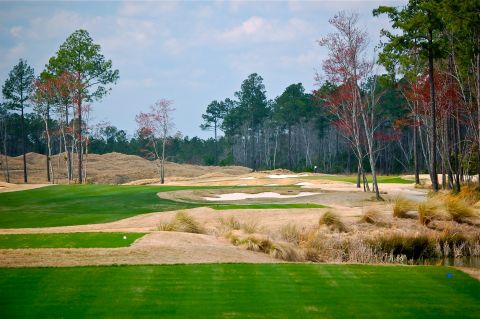 The view from the 12th tee at Cape Fear National, Brunswick Forest's golf course in Leland, NC, combines most elements on the rest of the Tim Cate layout -- sand, rolling fairways, and marshland.

In the middle of the state, Chapel Hill is one of our favorite towns in the South. Anchored by the University of North Carolina and not far from rival Duke University, Chapel Hill offers virtually every type of cultural, educational and culinary diversion. One of the area’s prime golf communities is Governors Club, with an impressive natural landscape that features many large rock outcroppings and significant changes in elevation that also characterize the 27 holes of Jack Nicklaus golf.  For those who don’t want to give up any urban services, nearby Raleigh offers virtually everything you would want in a major city, including a top-notch international airport and the full range of golf community options.

And then there are the mountains, anchored by every Top 10 list’s best place to live, Asheville. Some describe the lofty town as San Francisco East, but its local citizens, both the new and longtime, testify it is uniquely its own. We suspect both camps are accurate, but one thing we are sure of – the Asheville area is replete with a diversity of golf communities. At 4,000 feet altitude, Mountain Air probably doesn’t require much else to label it unique, but a top of the mountain air strip and golf course that surrounds it -– you sometimes have to wait for a plane to land before proceeding to the next tee – helps give Mountain Air its lofty reputation. The golf course plays through rarefied air, giving new meaning to the phrase, “Hit it thin to win.” Well on the other side of Asheville, Champion Hills in Hendersonville has one of the most involved memberships anywhere. Their strategic planning efforts helped the community weather the storms of recession where other communities struggled. After renovating the already excellent Tom Fazio golf course, members were proud to learn the layout was named the 5th best in the golf rich state of North Carolina.

If you would like more information on any golf communities in North Carolina or help in arranging a tour, please contact us.  We have established a strong network of real estate professionals in the Tarheel State and throughout the South.  We look forward to assisting you.

More in this category: « Market going crazy…five years from now To Build or not to Build, that is the question we tackle in Home On The Course »
back to top
Back to Top