My friend Ed and I played a public golf course in Simsbury, CT, last week, a course I have played regularly, if not frequently, over my 30 years in the Nutmeg State. It was Ed’s first time. He loved it and, I must say, that the combination of seeing it through his eyes and having played it enough to (finally) understand the dipsy-doodle fairways and odd angles softened my view of a layout I previously thought was a bit quirky.

The course is Tower Ridge, about 20 minutes northwest of Hartford, and scraped into the lower slope of the western side of the Avon Mountain, below the iconic Heublein Tower, built in 1914 by the food and beverage magnate who gave us, among other consumables, A-1 Steak Sauce and

The Heublein Tower was built by the man who gave us Smirnoff Vodka and A-1 steak sauce.
Smirnoff vodka. The golf course designer, the recently departed Geoffrey Cornish -- he was 97 and still evaluating courses when he died last February -- was not given the easiest piece of property to work with. As we played the four holes on the first nine that run along the slope of the mountain, Ed remarked, “They must have pushed around a lot of dirt to level out these fairways.” Still, the fairways on the 5th through 7th holes, all par 4s, tilt dramatically enough that tee shots to the center of the fairways will end up down in the rough. On #5 and #7, which play north along the mountainside, the blind tee shots are aimed where rough meets fairway; a slight push on a day when the rough is fairly lush could leave a daunting shot along the high side of the fairway to a smallish green. Anything short, or even slightly pulled, will risk bounding down into a ravine below (unless a well-placed bunker saves the day). The beautiful but distracting western views to the Farmington Valley below, as well as some tricky winds that get caught in the face of the mountain, don’t help the concentration quotient very much. 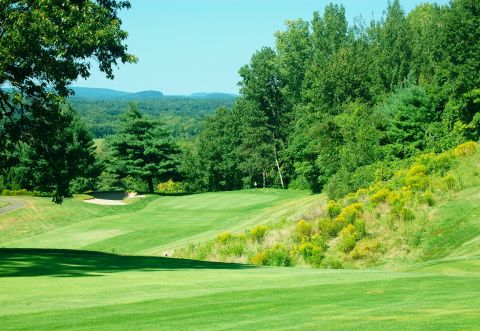 The approach from the right side of the 5th fairway at Tower Ridge is treacherous, especially with your feet below the ball and a steep falloff to the left of the green.

Between the 5th and 7th, the angle off the elevated tee at #6 forces you to aim directly at the cart path that runs between the fairway and the deep and steep left rough. On this day, the golf gods were with me, and I hit the cart path, took a huge bound forward and to the right, and wound up a good 40 yards beyond my typical best drives (around 240 when solidly struck), leaving just a nine-iron into the small green.

At par 70, Tower Ridge is a short course even from the tips (6,500 yards), but there is nothing short, or easy, about its par 3s. Because of its elevation, the 240-yard par 3 8th may play two or three clubs shorter than its yardage, but the largest green on the course –- at least it seems that way -– is not nearly as wide as it is deep, and getting up and down from either side of it is less than 50/50 for even the decent player. Judging distance on a green that is 30 yards deep, a small skyscraper’s distance below the tee box, and subject to those fickle mountainside winds adds to the intimidation factor (as does the fact that the front of the tee box blocks any view of the green from the back of the tee box). It isn’t every day a golfer faces a blind shot on a par 3? 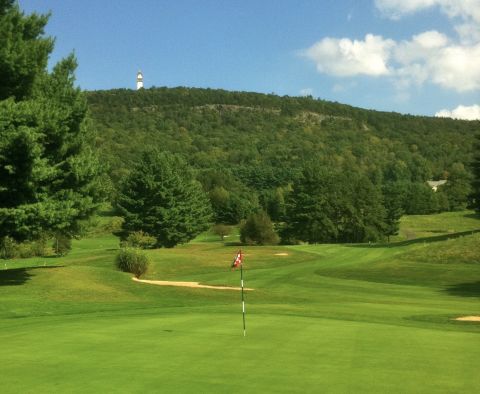 The Heublein Tower, atop Avon Mountain, is visible from virtually every point on the golf course.

A few of the holes that play up the mountain are not only sloped but doglegged, mostly to the right, necessitating a fade off the tee or a 3-wood for the longer hitters to avoid bounding into the woods on the left. Local knowledge counts for a lot on these and virtually all the other holes at Tower Ridge, so if you find yourself in the area and looking for an interesting golf course, plan to play early in the day in order to play it twice (our round was an extreme bargain at just $36, cart included). It will take at least two attempts to get the hang of this challenging, but fun, golf course.

For those wondering about housing adjacent to the golf course, one sprawling home lurks above the 6th fairway and another is a little farther south along the mountainside, well back from the golf course. That’s it. Nod Road, the street that bisects the golf course, is the only other sign of civilization once you get beyond the first couple of holes.

More in this category: « DOA: Ryder Cup post-mortem Bargains Highlight Recent Golf Property Sales »
back to top
Back to Top