Cliffs notes come due; big changes ahead for once high-flying Carolina golf group

Written by  Larry Gavrich
Rate this article
(0 votes)
According to residential development experts, real estate investors and residents of The Cliffs Communities, ownership in the vaunted high-end group of developments may look a lot different a few months from now, and the visionary who conceived some of the most publicized golf communities east of the Mississippi could very well find himself watching it all from outside the gates.

The oft-praised group of communities in the Carolinas has been split into two entities that cover all unsold real estate and most of the amenities, including six well conditioned golf courses. ClubCo, an entity formed by the group of residents that loaned developer Jim Anthony $64 million last year, 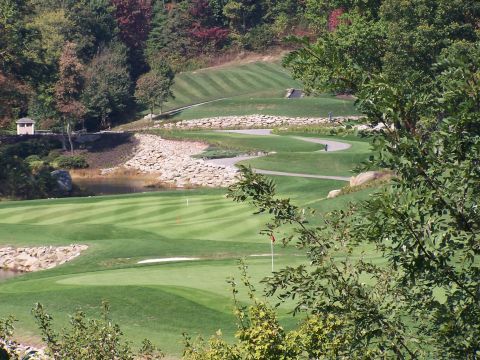 The six Cliffs golf courses, including designs by Fazio and Nicklaus, are challenging layouts, nicely conditioned and private.  Cliffs members, some of whom loaned the developer $64 million, aim to keep them that way.

now owns and manages the Cliffs’ golf courses, clubhouses and other amenities after about half the loan was used to pay off debt. Anthony still maintains tacit control as long as ClubCo pays its bills. The other half of the loan amount, according to Cliffs residents, has been used mostly to finish the Gary Player designed Mountain Park course, which was originally planned to open last year but now is scheduled for a summer 2012 debut; some for clearing land to make way for the ill-fated Tiger Woods course at High Carolina; and a portion to finish partially built amenities, including a lake house and tennis courts. (Note: We erred in an earlier article about The Cliffs’ latest advertising campaign when we said the Gary Player course was open for play.)

In order to survive financially, ClubCo depends on golf membership deposits, monthly dues, food and beverage receipts and a fee generated from every developer lot that is sold. ClubCo promised to pay its note holders -– those who contributed to the $64 million loan to Anthony -– 12% interest over seven years in the form of cash or a dues waiver. That

The Cliffs golf clubs depend on property sales for a big part of their revenue stream, but property sales are lagging.
obligation, as well as the traditionally high standards of maintenance at Cliffs golf courses, will be difficult to meet given that land sales, which would be slow in this economy anyway, are being further affected by a lawsuit brought by The Cliffs against a Texas company called Urbana, which had agreed to purchase much of the real estate in High Carolina. Jim Anthony claims Urbana and a local bank conspired to defraud him; whether that is true or not, the publicity about the lawsuit does not inspire confidence in those being courted to spend hundreds of thousands of dollars for a lot at The Cliffs. Without the property sales, ClubCo is deprived of a major component of its revenue stream.

In advance of the injection of dues payments in 2012, ClubCo has raised member dues by 10%, or $100 per month, for the last four months of 2011. But ClubCo owes its note holders roughly $8 million as of this coming January. If it can’t pay, the note holders gain title to virtually all of The Cliffs’ amenities, including the golf courses and clubhouses, and take over full control from Anthony. Insiders at The Cliffs do not believe Anthony himself will come up with an investor to fund the interest payments –- barring an 11th hour bailout by some multi-millionaire like, say, Anthony’s good friend Tiger Woods –- and that means The Cliffs’ visionary will no longer have any say in the running of the amenities he conceived.

Assuming the ClubCo note holders do take full control of the amenities, that protects The Cliffs members and residents from someone buying the real estate and amenities in one package, on the cheap, and “dumbing down” the product (condos, semi-private or public golf clubs, building homes where a golf course or two once stood). Even

Many residents who bought the developer's vision now believe things can best move ahead without his participation.
if Anthony sells the undeveloped properties for pennies on the dollar, the new developer will have to deal with the members who own the clubs; and, anyway, the new developer should have a vested interest in retaining a high level of amenities. The likelihood that real estate values will remain fairly stable is much higher with amenities that remain private and well tended, which is almost a certainty with The Cliffs members in charge.

Some of the residents who invested more than seven figures in a home at The Cliffs largely on the basis of Jim Anthony’s vision now believe the communities’ future will best be served if he is no longer a part of the operation. A couple of residents, who always temper their comments with kind words about Jim Anthony’s character, used the word “delusional” to describe the developer’s continuing obsession with developing High Carolina and its Tiger Woods course. (Editor’s Note: I believe his obsession with Tiger Woods himself, as evidenced in the latest Cliffs’ ad campaign, also seems delusional. Fallen stars can’t sell anything but they certainly can pollute the value of your brand.)

Once The Cliffs is freed from the yoke of its original conception, a relic of a bygone economy, some creative new thinking could help bring the development back to solvency. A block of residents and ClubCo note holders are arguing for breaking The Cliffs into three groups of communities -– lake, mountain and Asheville. Access to seven golf courses sounds good in marketing materials, but in reality, Cliffs members tell us, relatively few members play golf courses outside their own community more than occasionally. (Note: It is an hour’s drive each way from one end of the string of Cliffs communities to the other end.) The communities in the Keowee Lake area feature a total of three golf courses, the area around Greenville will have three of its own, once Mountain Park is completed, and the Jack Nicklaus Signature Walnut Cove course near Asheville is arguably the best of the bunch. Dues, which are bumping up close to $1,000 per month already, will surely have to rise further to cover the shortfall in operating budgets without the benefit of significantly more lot sales or influx of new members. And whoever winds up owning the golf clubs will have to reconcile if the market can continue to bear $100,000 initiation fees ($50,000 non-refundable).

Most insiders at The Cliffs believe that Anthony will not be able to survive financially in the current market, and that some land development group will come in to re-start the sales process, unencumbered by the disaster that is High Carolina.

“Like most developers,” one Cliffs member told us, “Anthony was a gambler, always betting on the next roll of the dice. He rolled two times too many with Mountain Park and High Carolina.”

“He is, by almost everyone's admission,” another resident said of Jim Anthony, “honest and genuine.  There are no allegations that he misled people or funneled money into his personal accounts.

More in this category: « Congress considering residence visas for foreigners who invest in U.S. real estate Are Richmond's Dominion golf club members getting the shaft (super stiff)? »
back to top
Back to Top