Happily married since before Arpanet evolved into the World Wide Web, I have no need for dating services like Match.com or eHarmony.  But it doesn’t take much to imagine that a first date with a total stranger could go in one of many directions –- ranging from extreme discomfort to grand seduction.

So it is with golf courses we play for the first time.  I recall a few rounds on mountain courses, notably Vermont’s Mount Snow (or perhaps it was Sugarbush) many years ago, that were uncomfortable in the extreme and a drain on my resources.  (I lost a dozen golf balls that started straight toward the middle of fairways and disappeared to Lord-knows-where once they bounded down impossibly tilted slopes.)  At the other extreme are golf courses whose charms and challenges are in plain view, not hidden beyond elevated fairways or quirkily slanted terrain.  Count virtually any Donald Ross golf course among these, as well as many of the other classic layouts from the Golden Age of golf course design in the 1920s and 1930s.  Those golf architects respected both the land they worked with and the golfers they challenged. 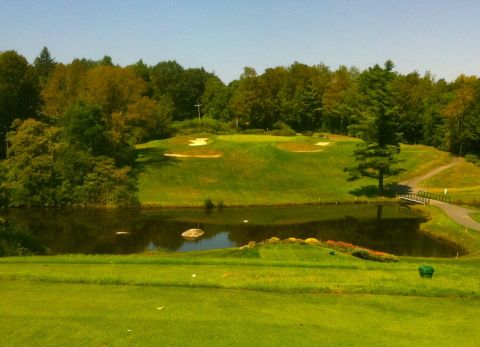 The par 3 11th is one of the most attractive and challenging one-shotters in the state of Connecticut.

Torrington Country Club, circa 1929 and in the rolling Litchfield Hills of western Connecticut -- a golf course I have driven past dozens of times over the 27 years I have lived in Connecticut and always wanted to play –- was much more a seductive first date than a discomforting one.  The frustrations of a few quirky holes of the Orrin Smith layout are more than compensated by some of the most interesting green complexes in the state, as well as a wide variety of green sizes, shapes and topographies.  Smith, who worked for Ross in the ‘20s and ‘30s, showed great restraint and respect for the swirling country landscape, resulting in a few holes that are much kinder to the eyes than they are to scores.  A few fairways are so tilted that a tee shot landing on one edge can bound across the short grass and almost into the rough on the other side (in other words, some shots down the middle will find the rough).  The rough itself, just six days after the torrential rains from Tropical Storm Irene was, needless to say, deep.   I tend not to look at slope ratings before I play a course, but I wasn’t surprised afterwards to note our short routing from the blue tees -– 6,274 yards total –- carried a slope of 132, high for such a modest length.  (Note: The course plays to only 6,651 from the tips, with a rating of 71.5 and slope of 134.)

The abbreviated distance comes substantially from the four short par 5s.  From the blue tees, two of them are a little over 500 yards, and the other two are 472 yards and 491 respectively, both on the back nine.  Those are short enough to get long hitters salivating on the tee boxes, but #12, for example, is deceptively long, a hard dogleg right with trees guarding the ideal landing area a good 200 yards out.  If you cut the dogleg without a left to right fade on your tee ball, you run the risk of rolling through the left side of the fairway and into the gnarly rough.  Pull the ball a bit, and a stream on the left comes into play; push right, and the trees will block an approach toward the green.  A hybrid or five-wood off the tee, followed by another fairway wood, leaves an easy wedge to a green that is deep and narrow side to side.  Patience is rewarded on such a hole. 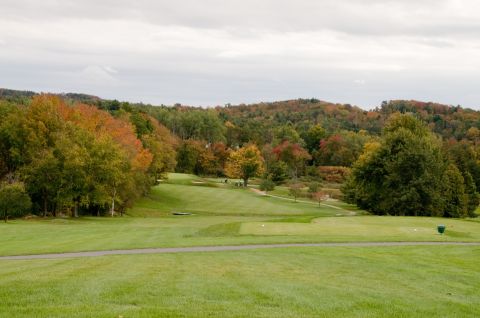 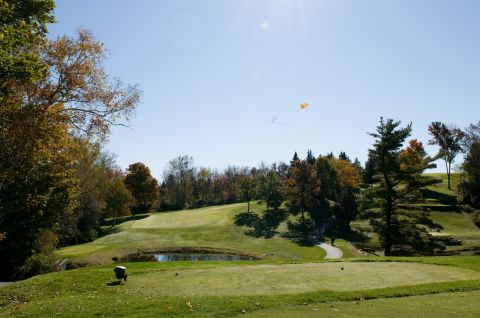 Above two photos and one below courtesy of Mark Hansen.

With the exception of the comparatively bland 17th, the par 3s at Torrington are a special delight.  And although they are in a pretty tight range of distances –- 153 yards to 179 yards -- they are of strikingly different character.  Two that stood out were #3 and #11. At 153 yards, #3 is the shortest of the group, but yawning bunkers at right front and left front ensure that a thinly hit shot off the tee has a chance of reaching the green only if it negotiates a narrow neck of grass in front.  Like many of the greens at Torrington, this one slopes from back to front, making it inadvisable to be above the hole.  As on most of the falsely fronted greens at Torrington, a front pin position will be the most challenging on #3 (it was in the middle on the day my friend Bill and I played, probably the most generous positioning possible).

The par 3 11th – which the club’s web site indicates as its signature hole -- presents an entirely different challenge.  The view from an elevated tee to an even more elevated green gives the effect of a hole considerably longer than its stated 168 yards.  The carry over a fair-sized pond is the least of the challenges on the hole; the steep hill up to the green exerts a strong gravitational pull on shots that land just inches short of the putting surface, and the bunkers that cover all but the left front side of the green prevent much bailout opportunity.  This is one of the most challenging and visually arresting par 3s I have played in the state of Connecticut.

I recall only one hole without bunkers, the par 4 15th, but at 444 yards from the blue tees, it needed no adornment.  Bill and I hit what we thought were pretty good drives, but still had well over 200 yards remaining uphill to a smallish green.  But it was the short par 4s that got our attention, none more so than the beguiling 13th, at 307 yards the shortest of them all and, with a hill running down to the green from about 60 yards out, seemingly drivable -- the operative word being “seemingly” since the fairway slopes up to the crest of the hill before it falls down fast.  Wedge shots from the fairway are blind to an incredibly small green below, perched on a hill with an almost sheer drop behind leading to a place from which few will return in one shot.  From the rough just off the left side of the fairway, I had strong concerns that a wedge shot that landed short of the green would bound down the hill and through the green, or that a play on the fly to the green from the rough would lack sufficient spin to stop.  I chose to chip a 7-iron about 30 yards just over the crest of the hill and roll it down the hill. It wound up 6 inches into the rough beside the green, pin high, from where I got up and down for par.  Bill had pushed his drive into the trees on the right, from where he had the only view of the green and an open shot.  He hit a half-wedge that landed and stopped on the very front of the green, and he two-putted for par.  I moved toward the next tee with ambivalent feelings about the 13th hole; quirky, yes, but it provided intriguing options on the approach and, after all, I did make par. 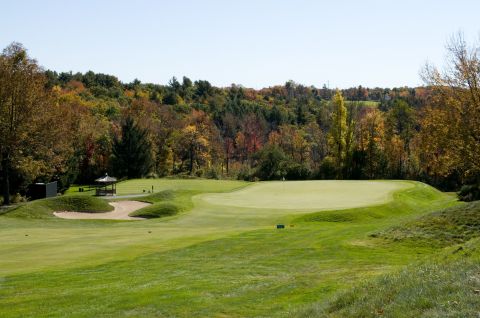 Torrington's greens are a collection of different shapes and sizes, some perched on a knob of land, and others almost in a bowl.  All are fast, and tricky to putt, the 5th among them.

Conditions on the course, especially after the heavy rains a few days earlier, were excellent.  Although the greens were showing some signs of a recent aeration, they putted true and faster than they looked.  On one par 4, Bill hit what we thought was a perfect approach that landed in front of the green, rolled up to pin high and then, in excruciatingly slow motion, began to roll down the front of the green and then faster down the false front, finally coming to rest 20 yards below.  From the left hand bunker on the same hole, I made the mistake of aiming my shot at the pin, landed short of it and, long slow story short, wound up 10 yards behind Bill’s ball.

First dates can be challenging, especially if you are not properly prepared.  I’ll know better next time.

The members-only Torrington Country Club is located on Torrington Road in Goshen, CT.  Initiation fees for full-family and single-golf memberships are just $1,000, with monthly dues less than $500 per month for families and less than $400 for singles.  The club membership is composed of local residents and part-time residents who own second homes in the beautiful Litchfield Hills area.  (The club is two hours from Manhattan.)  There are no houses adjacent to the golf course, although a few grain silos add a rustic touch.  Web: http://www.enjoytcc.com/.  Phone: 860-491-2688.

More in this category: « Yeah, right: Bad golf scores may actually be good for your health At 117 yards, toughest par 5 in golf? »
back to top
Back to Top