Written by  Larry Gavrich
Rate this article
(0 votes)
The Borders bookstore in downtown Burlington, VT, is still open in the wake of its parent company’s bankruptcy and deeply discounting its remaining supply of books, some at 70% off already cut prices.  I wandered into the store yesterday with my wife and daughter, who attends college just up the hill from downtown, and I came away with a hardbound, cocktail table tome called “Golf’s 100 Toughest Holes.”  It was written by Chris Millard with a foreword by golf architect Rees Jones, aka “the U.S. Open Doctor” for his renovations of top golf courses before they host the national golf championship.  I landed the only remaining copy in the store, happy to pay the $9.99 sticker price but even happier when the cashier deducted another 60%.

Rees Jones’ notes are especially interesting, as he celebrates his Donald Ross designed home course, Montclair (NJ) Golf Club, for its breakdown of birdie holes, medium difficulty holes and sternly challenging holes, three of each per nine at the 27-hole layout.  Jones writes that, “this balance is a principle of design.”  His insight caused me to think about my own home course, Pawleys Plantation in Pawleys Island, SC.  (By the way, few of the toughest 100 holes are located in a golf community.)  Designed by Jack Nicklaus in 1988, Pawleys Plantation meets Jones’ definition of a golf course that is “interesting to play.”  Some of you reading this may be familiar with Pawleys, as it is one of those “must play” courses for foursomes visiting the Myrtle Beach area (about 35 minutes south of the airport and just five minutes from the most celebrated course on the Grand Strand, Caledonia Golf & Fish Club).  Comments challenging my opinion about the holes at Pawleys would be welcome and appreciated. 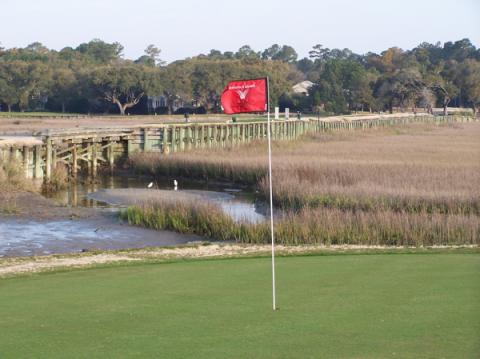 When the wind blows across the 13th green at Pawleys Plantation (here, from the right), the 115-yard tee shot from the former rice plantation dike must start over the marsh to have a decent chance of staying on the green.  Members describe the hole as the "shortest par 5 in America."

I just went through the Pawleys Plantation scorecard and, without regard to its individual-hole handicap ratings, I marked the holes I considered easy, medium and tough in terms of difficulty (from the blue tees, a total of 6,522 yards, with a rating of 72 and slope of 135).  I came up with six easy ones, seven medium ones and five tough ones.  The toughest on the front nine included #2, a 441-yard par 4 brute with a narrow fairway, marsh and bunker guarding the left side of the green, and a large, undulating green with a range of nasty pin positions; and #8, a dogleg-left par 4 of 419 yards that features trees and out of bounds on the left and a huge bunker from the 140 mark all the way to the green; if the pin is at the right rear, it could be the toughest hole on the course since that portion of the green is about the size of a belt buckle, and a miss short (bunker) or long (thick rough) puts you on the short side of the green.

The tidal muck in front of and beyond #13 green is pockmarked with white golf balls.
on the left, bailout off the tee to the right that leaves a long approach, marsh and a bunker at greenside right.  However, it is easier to make a conservative play to the front of the green at #16 than it is at #8, making a one-putt par a little easier.  The 17th is played off a facsimile of the dike that once regulated water flow on the former rice plantation, a full 167-yard carry over marsh and a bulkhead that holds up the green.  The shot to a green only about 15 yards deep at its midpoint would be tough enough without the ever-present wind blowing in from the Atlantic just a half-mile across the marsh.

The wind plays havoc with the 115-yard 13th hole, whose length would otherwise put it in the easy category but whose claim to fame is that bogies are more rare than double bogies.  Indeed, some bruised Pawleys members refer to it as the “shortest par 5 in America.”  Surrounded on 300 degrees by marsh, there is no more daunting sight than when the muck in front of the green is pockmarked by white golf balls that have floated in -- and will float out -- with the tide.  The green itself is smaller than the much more famous #17 “island green” at TPC Sawgrass, making the unlikelihood of a three-putt the only break on the hole.

The 17th at TPC, by the way, makes the list of the “100 Toughest Holes in America,” demonstrating that the book’s author has never played #13 at Pawleys Plantation, or maybe he made the perfect stroke when he did. 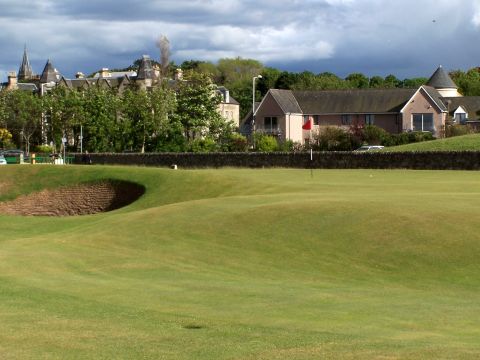 A road hole less traveled.  The 17th at St. Andrews Old Course makes the list of 100 toughest holes in golf.  The ball to the right of  the pin was your editor's in 2008, the result of a rare but nicely struck six iron.  He made the putt, demonstrating one reason why golf is the greatest sport:  Most pros would kill for a birdie, even one made by a mere mortal, at The Road Hole.

More in this category: « Connecticut's private Torrington Country Club hides just a few of its charms Irene barks but doesn't bite too badly »
back to top
Back to Top