Like Ike: Battlefield, college and golf made former President at home in Gettysburg
Thursday, November 4, 2010

Like Ike: Battlefield, college and golf made former President at home in Gettysburg

Ask any of us baby boomers born after WWII who was the most notable golfer among U.S. Presidents in our

lifetimes, and the quick answer will be Dwight Eisenhower (most of us will respond with the affectionate nickname “Ike”).  So identifiable with the game was Eisenhower that the sprawling pine tree 200 yards from the 17th tee at Augusta National was named lovingly for the former general’s propensity to drive a golf ball into it (he requested the club cut it down, but they didn’t).  After leaving the Presidency in 1956, Ike chose Gettysburg, PA, for his retirement home.  He and wife Mamie were lured by a beautiful piece of farmland, a huge Civil War battlefield where he could continue to study military history and strategy, a college where he could maintain an office and a connection to the intellectual life, and a 9-hole private country club where he could indulge his true passion.

Today, the Presidential golfer would have a few more choices of golf venues beyond the circa 1948 Gettysburg Country Club, still the only private club in the immediate area.  The best regarded alternative is The Links at Gettysburg, a few miles from the battlefield site and, like Eisenhower’s own retirement home, sited on a few hundred acres of rolling farmland.  (The Eisenhower farm, purchased by the President in 1950, was his home until his death in 1969 and is now a National Historic Site.) 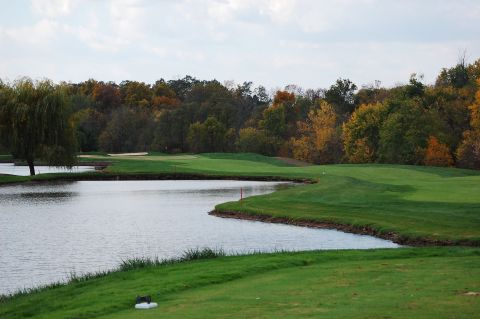 The par 3 13th hole at Links at Gettysburg.

The 18-hole Links at Gettysburg, which is surrounded by a community of estate-sized homes, patio homes and condominiums, is open year round and, since its debut in 2003, the favored upscale public golf course in the area.  Given its rural setting 10 miles from the center of Gettysburg (as well as the state of the current economy), I was surprised to find a community with more than 110 homes built and evidence of other construction activity (e.g. ground clearing for a group of “villas”).  But as developer Rick Klein explained, The Links at Gettysburg is not as remote as it appears.

“We are within 90 minutes of Baltimore and Washington (D.C.),” he told me.  “The airport in Harrisburg (Pennsylvania’s state capital) is an hour away.”  In other words, The Links’ location offers the twin benefits of seeming to be in the middle of nowhere but with easy access to big cities and big city airports.  When he lived in Gettysburg, Eisenhower was just a 90-minute drive to the White House, and less than a half-hour to Camp David in case one of his successors needed some, ahem, general advice.

From the tee box at the par 5 7th at The Links at Gettysburg.

Because of its relative proximity to the nation’s power center, The Links appeals to retired and employed Federal government workers, including members of the FBI, CIA and the armed forces.  The average age at The Links skews toward the late 50s, what with more than three quarters of the residents retired and another 10% or so baby boomers who still work.

“Most of them work out of their home offices but travel to D.C. one or two days a week,” says Klein, who refers to his development as “age targeted” rather than “age restricted.”  Only about 15% of The Links residents miss the target; that is, they are families with young children who don’t mind the commute to Gettysburg College or their offices in the nearby town.

The Links at Gettysburg offers the full range of house options, from “vertical” town homes (“The Cottages”) to “Villas” or small homes on patio size lots (starting at $270,000 and 1,800 square feet) to estate-style homes that average around 3,400 square feet (priced from the mid-six figures).  A new section of condos dubbed The Retreat will feature low-maintenance residences whose spaces (from 1,400 square feet) will mimic those of single-family homes at prices that begin below $300,000, all wrapped in an attractive French Country architecture.

Many of the homes at The Links at Gettysburg, like this model beside the 2nd tee, feature a French Country style.

The Links uses only two builders, which gives Klein and his team tight control over the look of the golf community.  On my drive through The Links, I got it; everything struck me as coordinated and harmonious.  Even the condo building looks as if it belongs to the same French Country tradition as the single-family homes.

One thing at The Links that is a bit of a jolt at first is the proximity of the larger homes to each other; I hadn’t seen homes that close since a trip to Austin, TX, where, given it was big old Texas, I was perplexed.  But the French Country homes at The Links, many of them larger than 2,500 square feet and just 10 feet from each other in some cases, are grouped around nicely landscaped and lit large courtyards, giving the clusters of homes an old-time, town center feel.  Those used to living in the suburbs may feel a bit confined, but city dwellers from Baltimore, Washington or Philadelphia will feel right at home, and then some.  Klein told me that the proximity of the homes made it possible for The Links to build large expanses of open spaces into their master plan, both inside the courtyards and beyond the individual properties.

The Links works hard to project the feel and reality of an active lifestyle, not only with the golf course but also with

its members-only clubhouse across the parking lot from the pro shop and snack bar.  In the members clubhouse, those who pay a onetime mandatory “amenities” fee (between $3,000 and $4,500, depending on which section of the community they live in), plus modest annual dues, enjoy a fitness center, sauna room, outdoor pool with heated spa, and locker room.  Golf membership for those who purchase a home inside The Links costs $10,500, with dues between $265 and $290 per month (non-residents pay a $14,000 initiation fee).  For those from the surrounding communities who pay as they go on an annual basis, the fees run from $1,000 for weekday-only golf to $4,500 for what Klein describes as “all golf, all the time.”  Members, of course, have tee-time reservation preferences.

I could not give The Links golf course its full due because the greens had been aerated and covered with a heavy layer of sand two days before I visited.  But given the course’s popularity (26,000 rounds will be played this year) and the condition of the tee boxes and fairways as I made my way around, I assume conditions most of the time are topnotch.  The layout is both interesting and challenging; the design is by Lindsay Ervin, a relatively unknown architect whose other work has been almost exclusively in Maryland and Virginia.  The most commanding feature of The Links course, which is “links” in name only since it bears no resemblance to a traditional seaside links golf course, is its use of stone walls –- both manmade and natural.

At the short par 4 8th hole at The Links, a rock wall runs the entire length of the right side of the fairway and ends behind the green.

I hit the wall, literally, on the first hole, a short par four that is anything but a warm-up.  At 367 yards from the blue tees (6,666 yards total), the dogleg left forces you to place a drive down the right center of the banked fairway; too far right, however, and the splayed limbs of a tree 75 yards in front of the green can obstruct your view on the approach shot.  Beyond the tree lies two stone walls, one more or less free form and lining the back edge of a stream 40 yards in front of the green.  The more problematical wall, which snakes seductively up to a few yards in front of the green, compels an approach shot well over it lest you face a straight-up lob shot over it or, worse, a penalty drop.  However, a strategically placed bunker beyond the green will catch the overly aggressive play.  From that bunker it is straight downhill, in more ways than one, especially if the pin is at the front of the green, with the prospect of rolling back over the wall.

Another wall literally hovers over the par 3 3rd hole.  At about 40 feet high, it forms a backstop to the wide green but is not really in play because a thin ribbon of sand bunker separates it from the putting surface.  The dark rust color of the wall contrasts with the sunlit green to play tricks with the eye from the tee box for the otherwise routine downhill tee shot. 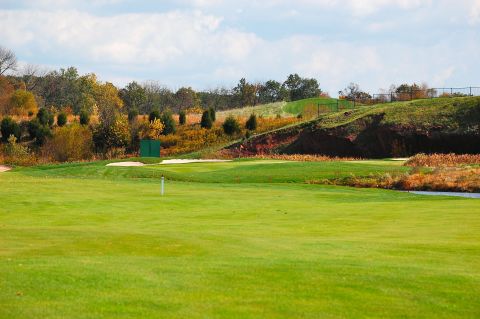 The approach to the 18th hole at The LInks.

The wall along the right side of the short (320 yard) dogleg left par 4 8th hole is much more problematical.  With a bunker in the landing area down the left side, the safe

play is across the width of the middle of the fairway but not so far that you reach the bunker on the far right side –- or the high rock face that runs a couple of hundred yards down the fairway to frame the back of the green, giving the entire hole a stadium look.  I found it impossible to judge the distance across the fairway to the wall and, to compound the degree of difficulty, thick rough ran from the fairway’s edge for about 15 yards to the wall.  I never did find my well struck tee ball, which I expected to be in the right hand bunker.  If I had it to do all over again, I would have popped a five wood over the barranca in front of the tee box to mid fairway, leaving just an eight iron or so to the green.  Or I would have gone directly toward the green, damn the bunkers guarding both sides.

Those kinds of judgment calls, as well as forced carries over water (including a creek appropriately named Lousy Run), longish par 5s and tight bunkering around greens put The Links at Gettysburg squarely in the category of tough public golf course.  Give designer Ervin and developer/owner Klein credit; fast play and a leisurely round of golf do not seem to have been their prime consideration in setting up the course.  A challenging experience was.  With a slope of 141 from the blue tees (rating 72.4) and 130 from the white tees (6,277 yards), The Links at Gettysburg golf course will battle even the most patient golfer.

If you would like more information about The LInks at Gettysburg or would like to arrange for a visit, please contact me and I will be happy to assist you.

More in this category: « Links to golf’s past: Reader makes classic pilgrimage to play the British Isles royals False positive? Toll Bros. settles suit; plaintiffs claimed overreliance on high-end »
back to top
Back to Top