Waubeeka Golf Links has always been something of the weak sister to the Taconic Golf Club, just five miles away in Williamstown, MA.  Taconic, at the edge of the campus of Williams College, one of the best small liberal arts schools in the nation, wins accolades for its beauty (#1 according to the Boston Globe) as well as its design, originally by Wayne Stiles and renovated this past summer by Gil Hanse.

But late this last summer, after a customary aeration, Taconic's greens were all damaged by the combo of heat and a soaking few days of rain.  Waubeeka started seeing more traffic and getting more buzz about some new developments there.  Until 2008, Waubeeka's owners had not invested in their course and it showed, with no real practice area, feeble-looking tee markers, a parking lot that appeared to have hosted exploded mines, and a golf course and layout that was full of unfulfilled promise. 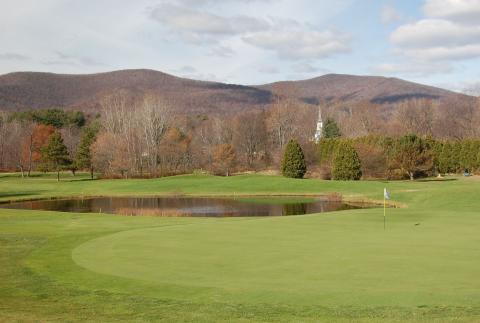 Waubeeka Golf Links in Williamstown, MA, has all the makings of a vintage New England course, including the mountains and church steeple.

That all changed when Williams College graduate Jim Goff, a senior executive with the Janus Fund, made the family of owners an offer they didn't refuse, $4.2 million, and committed plenty more right from the first day.  Perhaps Goff is on a mission of sorts; his dad had been head pro at Taconic for two decades.  At a time when most golf clubs are struggling to survive, Waubeeka is struggling to spend, with its new owner's blessing and involvement.   Although Goff, who lives in Denver and has the reputation for skilled land investments, has visited his only golf course holding just a couple of times, he is very much involved with its rebirth, according to General Manager Mark Mills.

Goff and Mills hired Mark Mungeam, chief designer in Geoffrey Cornish's architecture firm, to redo most of the holes on the course, which was originally designed in 1966 by Rowland Armacost.  Armacost's name is on four courses in the western Massachusetts area.  I walked Waubeeka in the late ‘90s when my son competed there in junior golf tournaments, and I always found it a fun, somewhat challenging course, with a nice mix of blind shots and shots from elevated areas down to greens below.  The Berkshire Mountains to the west form a beautiful backdrop for the high, lofted shots that work best at Waubeeka.  And at something like $40 for a round, less on a pro-rated basis for annual members, Waubeeka has always been a bargain.

Next July, when renovations on the course are completed, Waubeeka, which is just 45 minutes from Albany, NY, will be the high-end daily fee golf course choice in western Massachusetts.  The club remains open for the next couple of weeks (the kitchen is closed) until the snow falls, but holes 16 through 18 are closed already as they begin to get their makeover.  Everything, according to Mills, is being geared toward having a new 18 holes ready by mid-summer.

Only nine holes will be available when the club reopens next April, but in July 2010, the full 18 holes should become a magnet for a whole new crop of golfers and maybe even a few Taconic Golf Club devotees eager to test the next best thing in New England golf. 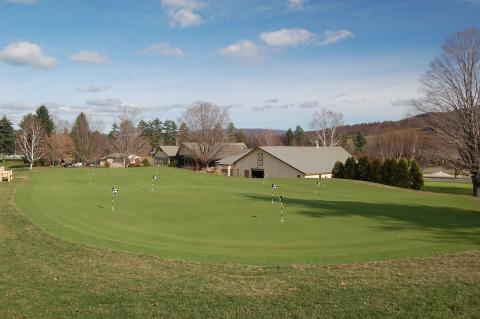 One of the first steps in Waubeeka's renovation was a new, 10,000 square foot practice green.

More in this category: « After Seven Great Years, We’ve Changed the Furniture at Golf Community Reviews A Donald Ross reincarnation »
back to top
Back to Top