A Harris poll that asks Americans the state where they would choose to live if they didn’t live in their own state indicates that Florida is the most popular state of all. But Florida also ranked 7th as the state least likely to attract survey respondents.
This is Florida’s plight as a place to live: It is attractive for its wonderful winter climate, its wide range of golf communities, a choice of coast or lake-oriented living and, for many, no state income tax; and it is a turnoff for its dense population (especially on the east coast), traffic problems and a perception as “God’s Waiting Room,” overpopulated with old people.
In a way, Florida is laughing all the way to the bank as its raw net migration in the past couple of years has exploded after a hiccup just before and during the early years of the recession. Population in the Sunshine State grows by more than 700 new residents every day, and there are strong signs that young people are being drawn by hip coastal locations, like Miami’s South Beach area. Millennials and Gen Xers who, combined, cover the 18 to 50 age group, put Florida #2 on their lists, after California. 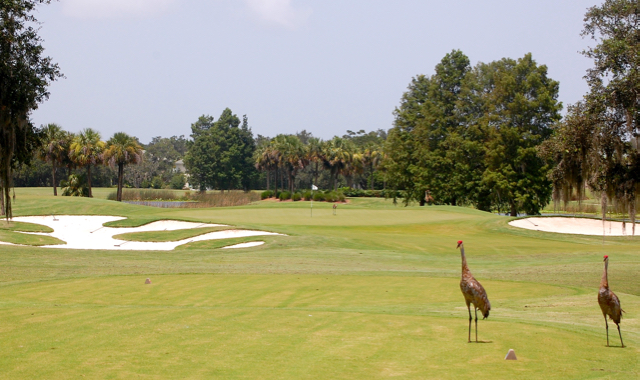 Water and sand aren't the only obstacles to shotmaking at Laurel Oak Country Club in Sarasota, FL. Sandhill cranes share space with Laurel Oak's members.
"[There are] a lot of young professionals and a buzz starting to happen down here," a 23-year-old transplant from Seattle to Fort Lauderdale told South Florida’s Sun Sentinel.
Baby boomers put Florida at #1 on their list and Hawaii #2 on the Harris poll. (Of course, the poll did not add an “if you could afford it” caveat to the “where would you live” question; if money is no object, few wouldn’t want to live in Hawaii.) Among all age groups, women and men put Florida at the top of their lists (the men in a tie for #1 with California).
The Carolinas did well in the survey, with North Carolina landing as the 7th most desired state and its southern neighbor holding down the 12th spot. Neither Carolina state appears on the Top 15 list of states least likely to attract residents, although other southern states like Mississippi (#4) and Alabama (#6) did make the least likely list (neither appears on the Top 15 “most likely” list). Texas, like Florida, is liked and disliked, landing at #6 and #5 respectively.
Speaking of Florida, I don’t think it is a coincidence that, in the last few weeks, I’ve run into people who have touted Sarasota for its urbane culture characterized by the Ringling Museum and other highlights, its lively downtown entertainment and restaurant scene and the nearby beaches, some of which have been ranked at the top of lists published by travel magazines. Our real estate professional in the area, Dennis Boyle, knows well all the area’s golf communities, among them Concession, Lakewood Ranch, Longboat Key and River Strand at Heritage Harbour, where 2 bedroom condos start as low as $145,000. Check out all of Dennis’ current homes for sale in Sarasota/Bradenton golf communities at our Golf Homes for Sale pages.  (Thanks to Golf Community Reviews reader Keith Spivey for calling our attention to the Harris Poll.)

More in this category: « Price drop for Venice home puts it in bargain range Golf Community Reviews Welcomes Vero Beach Golf Communities »
back to top
Back to Top