Sugarloaf Mountain a little rough but quite ready to live up to its promise
Friday, February 11, 2011

Sugarloaf Mountain, the Minneola, FL, golf course designed by the hot team of Bill Coore and Ben Crenshaw, is like a beautiful painting that has been vandalized with a splash of paint.  The course just needs some expert conservator to arrive on a white horse and scrape off some of the bad stuff to reveal what lies beneath.

I looked forward to my round at Sugarloaf yesterday with both excitement and trepidation.  The few Coore/Crenshaw courses I’ve played –- the PGA Tour course Kapalua Plantation in Hawaii and Cuscowilla Plantation an hour from Atlanta -– are among my favorites, and when it opened in 2008, Sugarloaf was widely hailed as another triumph of “natural” golf design.

I was intimidated, though, from reading some pretty damning

The grass on the greens was almost perfect, except you needed Paul Bunyan's axe handle for a putter.
player reviews about the turf conditions at Sugarloaf, depressing but not surprising in light of the bankruptcy filing of the parent company of Sugarloaf’s developers, Landmar (read my original story on the bankruptcy by clicking here).  The turf on the fairways was pretty “sketchy,” as my college-age daughter labels people and things that look the worse for wear.  They were thin and sandy in some places and not nearly as green as fairways at golf courses I passed on my drive to Sugarloaf.  That said, I needed to roll my ball over for a passable lie only twice during the round; the fairways give signs that when the warmer weather comes, they will grow in nicely.  The grass on the greens, however, was almost perfect in all regards but one –- not cut low enough for any putters lighter than a Paul Bunyan axe handle.  I just could not get the ball to the hole all day, even on 10-foot putts.  The grain was deceptively strong and always seemed to be growing toward the ball.  I’m also a slow learner.  I hope I get to play Sugarloaf again someday when the superintendent has the confidence to cut the greens down more, because they will be very nice. 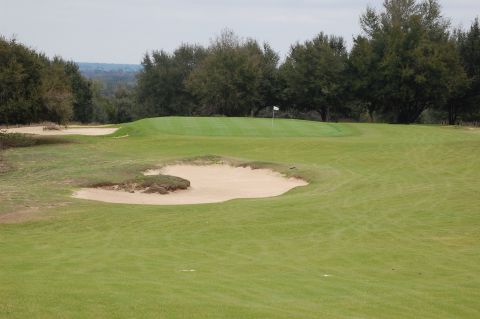 The approach to the first green gives a taste of the bunkers in fairway and against the green that give pause on the approach shot.

The developer of Sugarloaf, Landmar, is now gone, its sales office at the edge of the property is closed up, and except for fewer than a half dozen homes, there is no sign of any construction activity adjacent to the golf course (but plenty of stakes where home sites have been plotted out and a few indications that some sites had been sold).  According to one of the employees of the golf club, which is managed by Hampton Golf, a subsidiary of Landmar’s parent company, Crescent Resources, the original owners of the land and golf course will soon package them together for a sale.  If the right buyer comes along, one with deep pockets and a good plan for the golf course as well as the community, Sugarloaf may be worthy of consideration for those looking for an interesting opportunity about 40 minutes from Disney World and Orlando.

Here’s hoping especially that the new owners have an appreciation for excellent golf design, as well as the patience and deep pockets to burnish the fine layout.  All the Coore/Crenshaw elements that make them popular among architecture aficionados are

embedded into the Sugarloaf layout -– the natural (i.e. “rough”) free-form bunkers that look as if they might have been in place before the bulldozers arrived; a few interesting doglegs but not so many as to force too much thinking; and only one or two blind tee shots, but always with some aiming landmark in the distance (my scorecard included handwritten guidance from the pro shop on where to aim on those few blind holes, a friendly and helpful touch).  I played from the blue tees at 6,349 yards (rating 71.3, slope 124) but the firm fairways helped it play much shorter.  On some holes, bunkers in mid-fairway are more in play from the blue tees than from the black (6.747 yards) and the gold (7,076).  That was certainly the case on the par 5 9th hole where a center-fairway bunker with a grassy knob in its middle gobbled up my drive, forcing me to hit a lofted club over the knob; that left a long approach for my third shot.  I had plenty of room right and left of the bunker, so the fault was mine, not the designers’.  That bunker had as much right to be at mid fairway as does The Principal’s Nose at the 16th on the Old Course at St. Andrews. 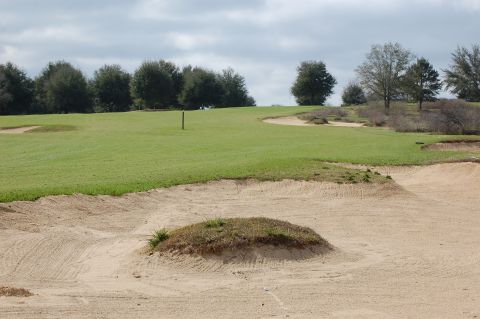 It could be called the Principal's Toupee.  The editor almost flipped his wig when a good tee shot wound up virtually stymied behind the knob on the par 5 9th.

Despite the shortish length for the blue tees, a few of the par 4s at Sugarloaf are king-sized, and on a windy day they compelled a few aggressive shots in order to get close to the greens.  The third hole at 434 yards, the 13th at a whopping 455 yards (but slightly downhill) and the 436-yard 18th, an uphill brute, stand out especially.  My favorite hole of the day, though, was the relatively short par 4 14th hole, a 348-yard dogleg right

around a marshy lake.  The hole plays a lot shorter if you man up and bust your drive over the left third of the lake.  I uncorked my best tee shot of the day, a little farther right than I wanted, and when it disappeared behind the reeds, I thought I might have dunked it.  It wound up 10 yards over the lake and left me just a 75-yard sand wedge to a small, tightly guarded and tilted green.  It would have been prudent to take a fairway metal off the tee and drop the ball just inside the 150 yard stake, but the approach to such a tiny green with trouble left, right and beyond would have been just as daunting as the tee shot over the lake.  This is a sign of great design, a hole that gives you flip-side options –- the reward of a conservatively played tee shot followed by the risk of a difficult approach; or the risk of an aggressive tee ball rewarded by a short and almost routine pitch shot.

Sugarloaf began as a private club but shortly after Landmar hit the skids, the course opened for play to anyone with $90 (or less) for green fees or a loose commitment to membership (as in pay dues monthly and quit anytime you feel like it).  I don’t expect too many of Sugarloaf’s regulars will be bolting soon, especially if turf conditions improve.  This is the only Coore/Crenshaw layout in the golf-laden state of Florida, and the players I spoke with seemed like a happy bunch. 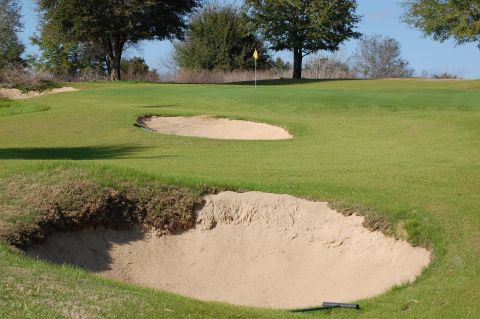 The par 4 15th is short, but stray left and you'll be dealing with some nasty pot bunkers.

And they were generous, too.  On the 3rd tee, the first blind shot of the day, a foursome of regulars invited me to play through and then one of them gave me my aiming line.  I pushed my drive well right, and just after I finished my follow through, a ball rolled up to my foot.  “That one might be out,” said the guy who had suggested an aiming line well left of my ball flight.  “Just leave my ball in the hole when you’re done.”  I busted the mulligan down the middle to a bunch of “attaboys” from behind.

As it turned out, I found my first ball under a tree just off the fairway and had a decent play toward the green.  The Sugarloaf layout is as generous as its regular players are.  Here’s hoping for a new day there. 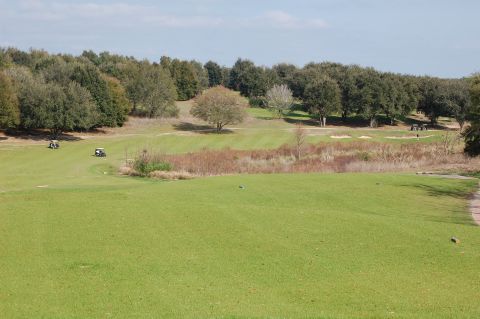 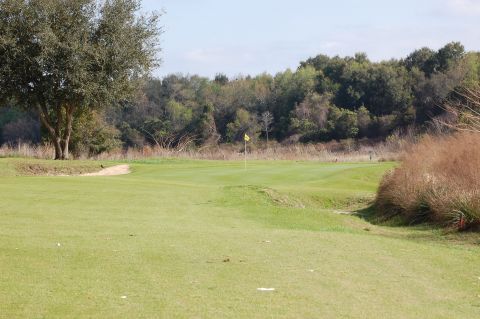 The best hole, a thinking man's par 4 dogleg right.  The safe way (top) is to whack a fairway metal just inside the 150-yard stake.  The better way, though riskier, is to fly the left side of the lake and take the bounce to the right, leaving a short wedge into a tilted and well guarded small green (bottom).

More in this category: « Willoughby Golf Club community, Stuart, FL Trying to catch some Orlando magic »
back to top
Back to Top