Bayside Resort: Nicklaus Signature golf course a bear, but a good one

Opened in 2005, the golf course at Bayside Resort in Selbyville, DE, is the newest of the three main public options around Rehoboth Beach.  It was designed by all-time great player Jack Nicklaus and is a test that would stretch the abilities of the Golden Bear himself, even in his prime.  At 7,545 yards from the back tees, with a rating of 77.4 and a slope of 146, it is one of the toughest golf courses anywhere and certainly not a place where a beginner will enjoy learning the game (although billed as a “resort” course, it is possible to be stuck behind a player whose time – and yours – might be better spent on a less rigorous routing.  However, a shrewd under-20-handicap player will be able to navigate the course after choosing the proper set of tees, in spite of Bayside’s many hazards.

As one of his more recent efforts, Bayside is indicative of Nicklaus’ maturation as a golf architect.  He has been active since the 1970s, and his earlier designs were often heavily sculpted and manufactured, bursting with chocolate-drop mounds, small greens, and nightmarish bunkers.  Though some of his earlier efforts, such as Loxahatchee in Jupiter, FL, and Grand Cypress outside of Orlando are still well-regarded by golf architecture buffs, his more recent efforts, such as May River outside of Hilton Head, SC, and, indeed, Bayside display a greater grasp of subtlety and a nod to the game played by higher-handicap players. 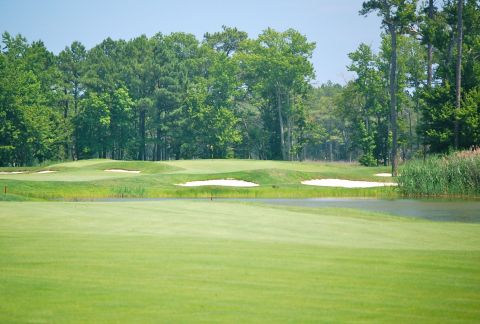 The approach to the par 5 2nd hole at the Nicklaus-designed Bayside.

Bayside weaves in and out of forest and expansive wetlands that border nearby Assawoman Bay.  The golf course features quite a few forced carries, but if a player chooses the correct set of tees, lost golf ball totals should be kept fairly low.  At the par five 2nd hole, for example, the longest tees encourage the low-handicap golfer to play diagonally across a corner of a pond, but the shorter tees offer a more straight-on angle up the broad fairway, with room to avoid the pond to the right.

Nicklaus tends to build exemplary par threes, and Bayside is no exception in that regard.  The 227-yard third hole (172 from the middle set) demands a long iron or fairway wood to a small green surrounded by large short-grass chipping areas and a tiny bunker off to the left.  Even if the player misses the green — not unlikely — there are myriad ways to play the next shot.  Allowing the golfer to agonize over whether to putt, pitch, bump and run or flop a ball near the hole is part of what makes for successful, entertaining green complexes that stick in the player’s head long after the round is over. 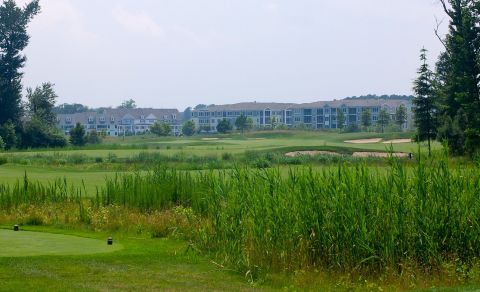 Bayside's real estate runs the gamut from single-family homes to multi-floored condos that dominate a few of the vistas from the golf course.

Another lovely short hole at Bayside is the beguiling 13th, the shortest on the golf course at 174 yards from the back tees (142 from the middle tees).  Its slender, two-level green is angled from front-right to back left and sits confidently in an idyllic setting amidst marsh and pines.  A rear pin position encourages a running shot that lands in the middle of the green and drifts down a slope towards the hole.  Errant shots will likely find one of three bunkers from which an up-and-down could provide a big lift to the round.

In addition to its tough, well-maintained, enjoyable golf course, Bayside Resort delivers a large grass driving range, as well as a modest but, nonetheless, functional putting green.  The day we played, LPGA Futures Tour player Ayaka Kaneko was practicing her putting at Bayside, further legitimizing the quality of the conditioning and practice facility.

Bayside’s peak-season green fees top out at $119, which is in line with the quality of the golf course and facilities.  We played in the afternoon and the $84 we paid made Bayside a better value and overall experience than nearby Baywood Greens. 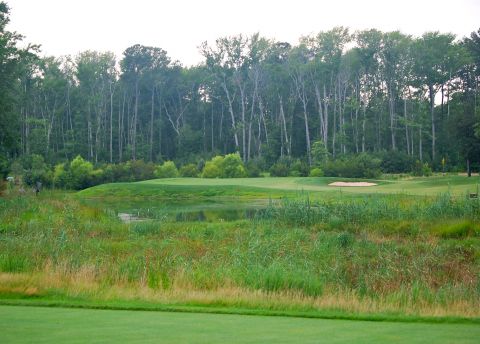 The marsh is ever-present at Bayside, as it is at the par 3 15th.

Editor’s Note: Our one and only previous visit to Bayside was two winters ago, a couple of days after a record-breaking snowstorm.  Roads were nearly impassable and the golf director did not show up for a scheduled meeting.  I understood.  In the heat of summer, the views from the golf course are all over the place, literally and figuratively.  The marsh is as attractive as parts of the Carolinas low country, and the spectre of the large hotels along the beach at Ocean City, MD, about four miles in the distance is strangely attractive, especially when lit from the west in the afternoon.  That said, the developers of Bayside made an unappealing choice in mixing attractive single-family homes on small lots between multi-story condo buildings that some might label “stack-a-shacks”; unfortunately, those hulks dominate some of the views from an otherwise impressively laid out and challenging golf course. 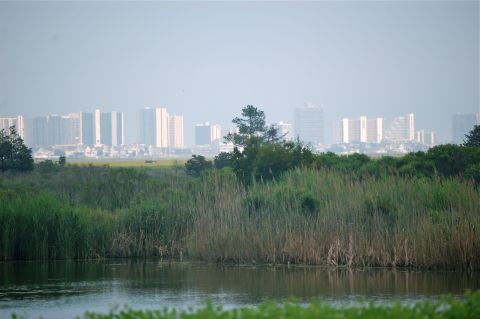 The monolithic hotels of Ocean City, MD, are just a few miles from Bayside.