This will be a fairly short article, given that I don't want to depress myself any more than two dinners depressed me the last two days. Sometimes you have no choice but to rely on the comments of others when it comes to choosing a restaurant on the road. I learned these last two days just how unreliable that can be.

Damned Trip Advisor
According to Trip Advisor, Dreamland BBQ in Montgomery, AL, is the second best restaurant in the city. But on a rainy Friday night, Dreamland was a nightmare, it's "sampler plate" showing the full range of its kitchen's ineptitude. The ribs were dry and barely seasoned, with neither smoke nor spice in evidence and no barbecue sauces on the table to help them along (although the platter included a heavily vinegared tomato sauce). The chopped/shredded pork and bits of barbecued chicken were plated almost on top of each other which turned out to be less than a faux pas since, aside from color, they were indistinguishable. Both were bland, tasting neither of pig nor fowl. The cole slaw was good in a deli-counter kind of way, but the only star on the platter was the smoked sausage, as good as I've had and worth the $2 upcharge. Overall, the best thing that could be said of the Ultimate Barbecue Sampler was its price, just $14.95 for a lot of food, almost all of it unmemorable. 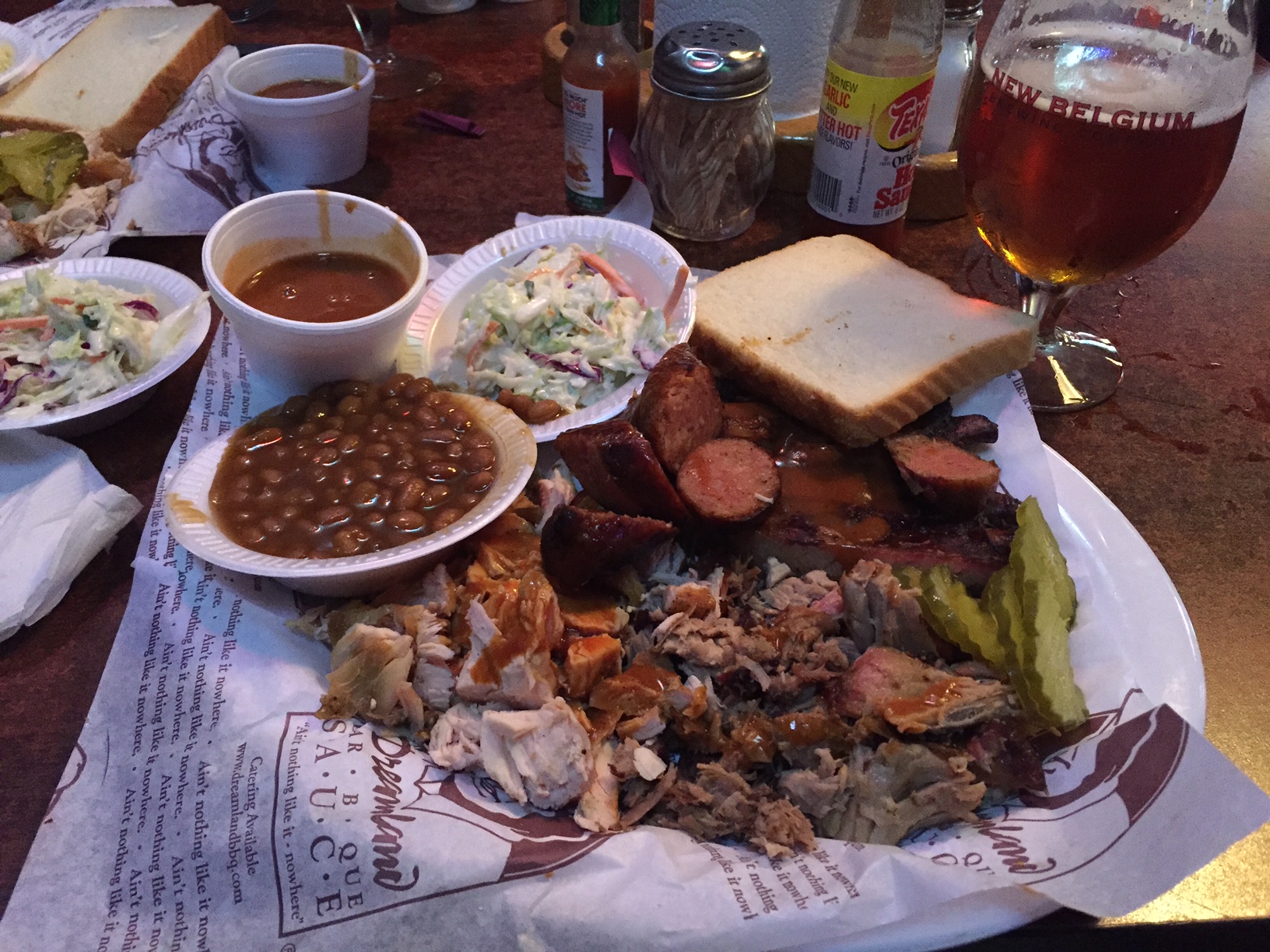 The Dreamland BBQ "Ultimate" sampler looked good but left something to be desired in the taste category -- except for the wonderful smoked sausage.

Go Fish, Just Not At Boudreaux's
I've been trying to be a good boy at the dinner table lately, especially at southern seafood restaurants where it is hard to turn down fried anything. I have been opting more and more for whatever a restaurant says is the catch of the day, and the last three pieces of grouper I have ordered were sterling. So at Boudreaux's, Daphne, AL's top restaurant according to Trip Advisor, I had great expectations for what our waitress said was the catch of the day, yellow tail snapper. I would describe it generously as the catch of the week, although what week I cannot be sure. It was as tough as an overcooked steak, the skin both curled and fused against the flesh. It took a surgeon's approach to separate the tough skin from the rest of that sad piece of fish; I left half of it for the trash compactor to struggle with. At $30 -- my wife ordered it as well -- it was the most expensive entree of our week, and the most disappointing of our year.

The Swamp Dries Up
The fish was so bad it almost made us forget the technical knockout in the appetizer round. Okay, the fried green tomatoes were good, crisply fried and with a nice shrimp remoulade on top. But the Swamp Cakes, which were described as loaded with all manner of seafood, including the bayou's ubiquitous craw dads, was a disaster. When shellfish is pulverized beyond recognition and then mixed with bread crumbs -- a lot of breadcrumbs -- the entire cake takes on the taste of, you guessed it, breadcrumbs. Shellfish is supposed to have a little bit of moisture associated with it (think good crab cakes you have had). The Swamp Cakes tasted like a badly made dry hush puppy on steroids.
Word to Trip Advisor reviewers. You don't need to give a good review to an overpriced restaurant in order to validate your choice to eat there. When the waitress asked how the meal was, I responded, "It had its moments." She asked if there was anything they could do to make it better. My mind was racing with ideas but instead I muttered, "That's okay. We're good." I couldn't wait to get out of there.

Greek Rides To The Rescue
Friday, by the way, was not a total loss as we stopped in Macon, GA, a place I always wanted to visit if for no other reason than it once was the home of a minor league hockey team with the coolest name ever, the Macon Whoopee. Macon's downtown area has a nice selection of restaurants that were busy during lunchtime. We chose the Greek Corner Deli for our own lunch. My wife is Greek American and we have made a habit of stopping at Greek restaurants wherever we find one. This was very casual Greek but there was nothing casual about the kitchen's output. My wife loved her chicken souvlaki while my lamb souvlaki was wonderfully marinated and grilled, although the pieces of meat -- which were intended more for the inside of the restaurant's terrfic pita bread -- were oddly shaped, less than a kabob and more like small meatballs and large bullets. But that tasty melange was the best thing I ate in two days.

More in this category: « Sweet home (in) Alabama
back to top
Back to Top