Each private club takes on a different atmosphere, its own separate character.  Some are strict golf clubs and are demure, out-of-the-way operations that the outside world barely knows exist.  I think of Palmetto Golf Club in Aiken, SC, as emblematic of this type of club.  Other clubs are larger in scope, with deep membership rolls and lavish clubhouses; they add tennis, swimming, and other sides to the club experience for their members.  Wynlakes Golf and Country Club on the outskirts of Montgomery, AL, which certainly falls into this latter category, does an excellent job of balancing the needs of a family for a rounded communal experience with the needs of a golfer for a challenging layout.

[Editor’s Note:  The community that surrounds Wynlakes Golf & CC features single-family homes that range in price from the high $200s to $1 million.  If you would like more information about properties for sale in the community or about other golf properties in the Montgomery area, please contact me.]

Opened in 1986, the course at Wynlakes was designed by Joe Lee, who produced such well-known American venues as the Blue Monster at the Doral Resort and Pine Tree Golf Club, both in Florida, as well as the original Dubsdread course at Cog Hill Golf Club outside of Chicago.  Cog Hill and Doral are annual stops on the PGA Tour schedule.  These Lee designs are known for being solid tests of golf with large, undulating greens and sprawling, many-fingered bunkers.  Wynlakes exhibits these hallmarks of Lee’s architectural style as well. 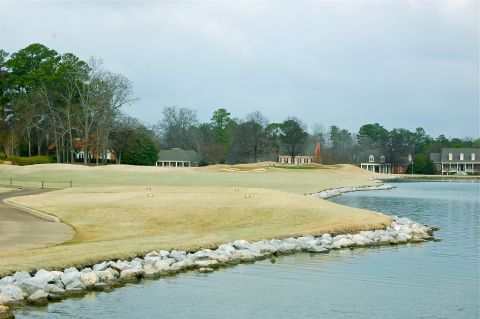 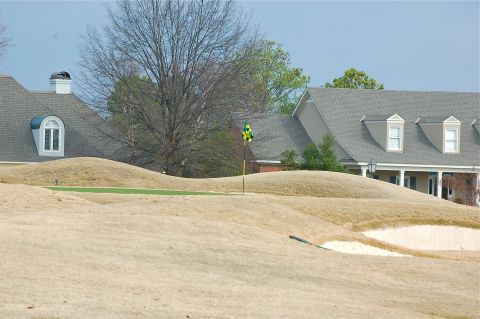 Scary prospects along the right side of the par 4 5th hole at Wynlakes sends most drives well left.  The green is well guarded and elevated, making approaches from the safer left side especially challenging.  Photos by Larry Gavrich

As golf courses go, Wynlakes is not particularly difficult from any set of tees.  The tips, at 6,979 yards, play to a rating of 73.3 and a slope of 126.  Although houses sit along one or both sides of most fairways, they are well back, leaving ample room for recovery shots or pitch outs in most cases.

Wynlakes begins somewhat awkwardly, with a 583-yard par five that doglegs hard to the left around two fairway bunkers.  Even a straight drive may force players to curl their lay-up shot around trees that line the left side of the fairway.  This is Wynlakes' only strange hole, and its transgressions are by no means horrible.

After two slight dogleg-left par fours, the player encounters the first of four stout par threes.  The fourth hole weighs in at 183 yards from the tips and 158 yards from the middle “Member” tees.  The shot plays slightly downhill, all carry over a corner of A.W. Dale Lake to a deep rectangular green surrounded by grass hollows and bunkers.  A green in regulation on this hole is well earned. 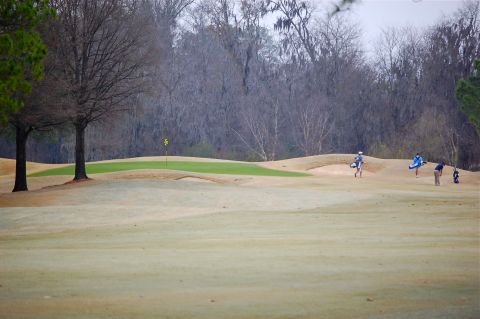 Trees along the left side and near the green at the par 5 starting hole at Wynlakes make a layup down the right side of the fairway mandatory.

Wynlakes features a good amount of water, but in all but three cases, the player has options to go around or play over the hazards.  Oftentimes, this allows the aggressive players to put their scores at risk in pursuit of an easier next shot.  The sixth hole is an excellent example of this choice.  It is a hard dogleg left around a pond where the player can choose to play to the right of the pond, leaving a mid-iron shot to the green, or directly over it, leaving as little as a half-wedge.  Taking the short route requires a drive that carries at least 250 yards from the back tees.  A ball hit too far left will definitely find the hazard, but a well-executed shot will create a great birdie opportunity.

Wynlakes’ front nine is long and challenging, but the back nine is more charming and dramatic.  Hole 11 is the longest of Wynlakes’ four par threes and is also the only hole on the course without a bunker, but by no means is it a pushover.  At 202 yards from the back tee box, the long iron plays to one of Wynlakes' largest greens and the one with the boldest contours of any putting surface on the course.  Various ridges and slopes separate the green into three distinct sections.  Playing the hole on consecutive days could demand different club selections, especially if the wind is kicking up, and even different shapes to the shot.  Such variability of play on a particular hole day to day is often what separates the thoughtful designer's work from the mundane. 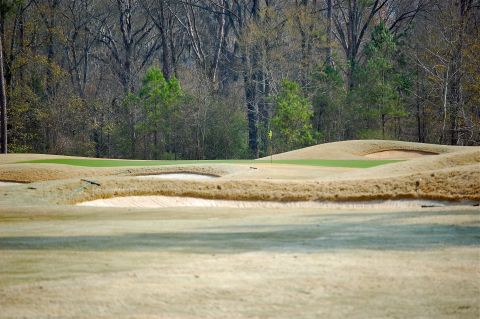 Bunkering around the 12th green is indicative of the protection designer Joe Lee provides for many of the putting surfaces at Wynlakes.

The back nine exposes an interesting quirk of the routing at Wynlakes.  After holing out on the par four 15th, players must walk (or ride, as is most often the case) about 350 yards to the 16th tee — a journey past the putting green, driving range and clubhouse.  The final three holes are laid out in a triangle — used, no doubt, by members wishing to test out what they’ve been practicing on the range late in the afternoon and evening.  This is the finest three-hole stretch on the golf course.  It begins with a 548-yard par five, a straightaway hole that invites a big swing off the tee.  Trouble awaits on the second and third shots.  The green sits hard by a pond, with bunkers protecting its outer edges.  Depending on wind (which is abundant at Wynlakes) and firmness of the fairways, one might be tempted to try for the green in two, making a wide range of scores (from 3 to 8) a distinct possibility.

The 17th changes the pace beautifully at a crucial point in the round.  Many golf courses’ penultimate tests are long par threes with abundant trouble, ready to extract bogeys and worse while making players work hard to save par.  The 17th at Wynlakes, by contrast, is a mere 136 yards from the back tees — a late birdie opportunity.  But this is not a smart place to relax:  Water bordering the entire left side of the sloping green and a bunker on the right mean a careless swing could easily lead to a big score late in the round. 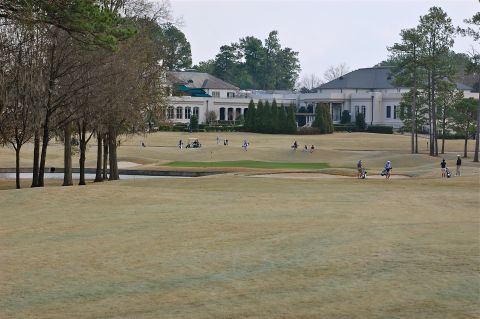 Wynlakes' massive clubhouse frames and dwarfs the finishing hole while a lake dominates most of the front of the green.

Like many courses, Wynlakes saves on of its stiffest challenges for its closing hole.  At just under 440 yards from the back tees, it boasts a narrow fairway guarded by bunkers and water with a green that follows through on the theme of protection.  The putting surface is huge but, as at number 11, the bold internal contouring forces the player pressing to end the round on a high note to consider much more than merely finding the green in regulation in order to avoid a crushing three-putt.  The 18th at Wynlakes provides a solid ending note to a solid golf course.

Winlakes golf by the numbers:

Tim Gavrich is a senior at Washington & Lee University in Lexington, VA, where he is majoring in English.  A four-year member of the college golf team, he finished in 9th place in February at the Wynlakes Invitational, hosted by Huntingdon College.  After graduation in May, Tim plans to embark on a writing career that, he hopes, will involve golf in some way.
Read 6839 times Last modified on Friday, 27 September 2013 11:29

More in this category: Cheap thrills: $38 event for seniors on RT Jones Trail »
back to top
Back to Top