You could make an argument that the Robert Trent Jones Golf Trail was way ahead of its time.  It was the first major golf project funded by a state pension program, in this case Alabama's Retirement Systems.  It was also the first collection of golf courses slapped with the designation

It would reasonably take two weeks to play all 468 holes on the Jones Trail.
"trail," something that has been copied in places as diverse as Myrtle Beach, Tennessee, Idaho and even North Dakota, although none are as long as the Jones Trail, which spans more than 370 miles from Muscle Shoals to Mobile.  It would reasonably take two weeks of 36 holes most days, and some impressive driving -- on Interstate 65 -- to play all 468 holes.

Those who consider a home along the trail and the incredibly reasonable state resident golf membership plan can take their time playing the entire collection of wonderful courses; and there is probably no better location to put down stakes than adjacent to one of the best clusters of courses on the entire trail, at Grand National Golf Club near Opelika and Auburn.  Not only that, but a new selection of golf cottages at National Village, right next door to the golf courses and to a large Marriott Hotel, are priced quite reasonably and seem well appointed base on the community's web site.

I visited National Village and played the Grand National Lake Course 20 months ago, and while I thought the more traditional family homes in the community were a little too close to each other to warrant the $600,000 and up price tags, these new cottages seem like a terrific bargain starting at $199,000.  The recession in the housing market has clearly had an effect on real estate in the Opelika/Auburn area, but with a major university nearby (Auburn), a grand buffet of golf course choices, and all those baby boomers poised to move south, National Village could be singing "Happy Trail" soon enough. 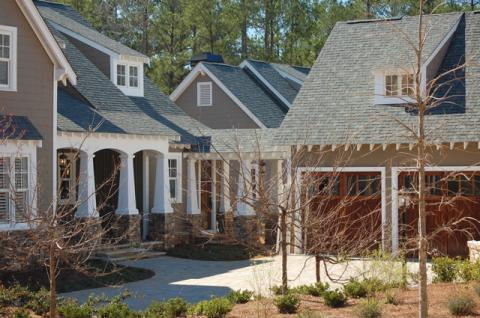 Some of the attractive cottages at National Village, beside the Robert Trent Jones Trail's Grand National Golf Club in Opelika, AL.

More in this category: « Sweet Home (of golf) Alabama Sweet Home Alabama: Big discounts for Jones Trail Card holders »
back to top
Back to Top