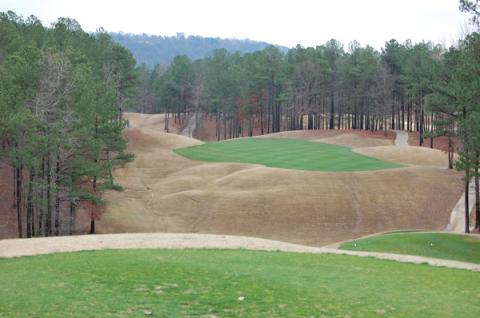 The view from the first tee box at the Ridge Course provides a sense of the roller coaster day to come.

Review:  Oxmoor Valley Ridge Course
I am glad I left Oxmoor Valley's Ridge Course for last on my visit to the Robert Trent Jones Golf Trail a couple of weeks ago.  I needed the recovery time.
Because of a regular stream of storms that hit the Birmingham area over the previous two weeks, the course was damp and carts were relegated to paths only.  But during 18 holes landing my tee shots as far from the cart paths as possible, I was almost hallucinating from the literal ups and downs of the round.  But all shots must be struck and all photos must be taken in the name of faithful reportage, and no struggle is too much for my faithful readers.
Okay, unroll your eyes and cast them upon the photos above and below.  Oxmoor Valley's Ridge Course - the complex includes the 18 hole Lake Course, the 18 hole Valley Course and the 18 hole Short Course - was

The Ridge reminded me of some layouts I have played in the Asheville, NC, area.
the toughest and best layout of the three I played during the week (the others were Grand National's Lake Course and two of the three nines at the Silver Lakes complex, both terrific layouts but a little kinder and gentler in terms of contours than Oxmoor).  The Ridge reminded me of some layouts I have played in the Asheville, NC, area at significantly higher natural elevations, with funneled fairways and greens as elevated as the mountain courses.  Although a lake and a few streams came into play on a couple of holes, the dominant "hazard" was sloping.  Jones took the name "ridge" literally.
The architect probably never envisioned players would have to trek from the cart paths he designed.  In an effort to keep them as far out of play as possible, a la Tom Fazio, he set many of the paths behind high slopes at one side or other of Oxmoor's wide fairways.  That is wonderful for setting up clean vistas from tee boxes but not for negotiating your way across a fairway to hit your approach shot, with two or three clubs in hand (yardages on the cart paths don't help with distances for a ball across the fairway).  Up I went from the cart path, then down a literally slippery slope to the fairway then, after my shot, back up the big slope and down to the cart.  No one deserves those kinds of reminders of how out of shape they are.
Speaking of shape, the fairways at Oxmoor were not perfect, with some areas of tufted grass forcing me to play winter rules.  But it was winter, after all, and I was not at all put off.  The greens were nice but the Jones Trail, which publishes its aeration schedule on line, still should announce when you make your reservation that the greens had been aerated recently.  That said, most putts rolled toward the hole without incident.
I was enthused from the start at Oxmoor.  The first hole is just beautiful, a slight dogleg left whose elevated tee box gives you a chance at an extra carry of 15 to 20 yards on the 400-yard par 4 (from the orange, or men's, tees).  An approach left short will either present you with a delicate chip over a deep swale in the green or put you in the swale itself.  The chip is easier than the putt.
As at Silver Lakes (see review on Monday), the "signature" hole at the Ridge course is a par 5, the 3rd, and the second toughest hole on the course. (The toughest on the card is the finisher, another par 5 and, at 572 yards, the longest of all.)  But where the 18th hole's difficulty is about length, the 3rd is tricky and gorgeous, the smallish green fronted and backed by walls of shale rock (see photo below).  The drive will not threaten the wide stream that crosses the fairway from 270 to 322 yards out, and the layup over it is about leaving yourself the proper distance for an uphill wedge to the green.  You might consider 9 iron since any shot that comes up short will rebound off the rock wall and back down the fairway, making bogey not only possible but tough to achieve.
The other holes on the course feature many of the same swoops and swerves, if not shale rock, of the 3rd.  The par 3 8th is the only "water" hole on the course, with a piece of the lake fronting the entire green, along with peanut-shaped bunker, and coming into play as well along most of the back.  At 159 yards, the hole is not long but when the wind is blowing, you may wind up shoving clubs in and out of your bag before you choose one for the shot.
I have written about the bargain of Jones Trail membership, less than $2,000 annually for access to all courses with only the payment of a golf cart an extra.  What about living near the Oxmoor Valley courses?  As I

departed the course, I passed a brand new condo complex about 60 yards off the tee box at the 17th hole of the Valley Course (see inset photos).  I stopped in for a tour of the models at Cornerstones at Oxmoor Valley, which is independent of the Jones Trail and its developers.  The Cornerstones, built from plans by a national developer, offers nicely appointed, good quality two and three-bedroom homes on one floor, quite

attractive actually, and with only one flaw - - all units feature just two bathrooms, and the lack of that extra half bath, often referred to as a "powder room," may turn some people off.  The prices, however, won't turn many off.  The two-bedroom models start at just $229,000 and the three at just $259,000.  The small community of just 60 units when fully built will include a swimming pool, wonderfully appointed clubhouse (I was in it) and, of course, three excellent golf courses within a mile, with the 54-hole Ross Bridge complex just another couple of miles down the road.  If you would like more information, please contact me. 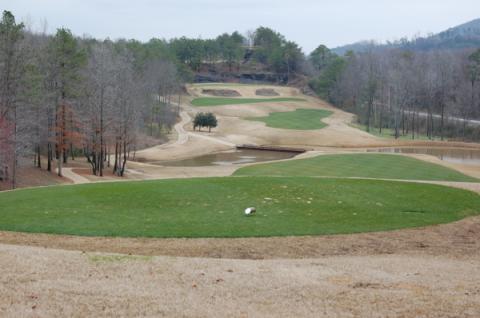 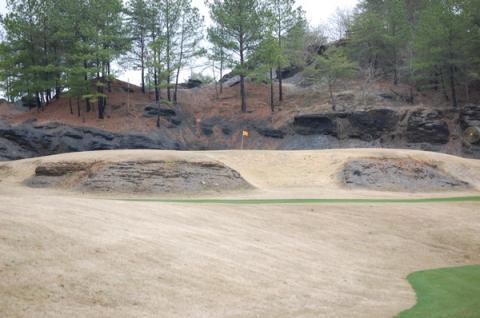 The par 5 3rd at Oxmoor's Ridge Course is beautiful as well as treacherous.  The tee shot (top photo) and layup shots are pretty routine, but that uphill approach (bottom photo) is hard as a rock.