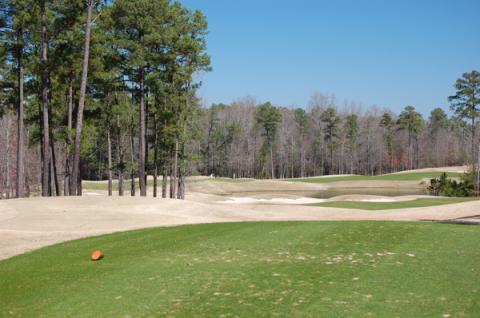 The Grand National Lake course opens with a beautifully designed par 4 dogleg left that brings all the Robert Trent Jones elements into play -- sand, water, and an elevated, sloping green.

A resident of Atlanta can leave his home after breakfast, play 18 holes of golf at the excellent Grand National complex in eastern Alabama, then nine at Grand National's fine Short Course, and still be home for dinner.
Lucky Atlantans.  The rest of us will just have to settle for flying into Atlanta and then taking the no-stress drive to Grand National and its 54 holes of golf.
Grand National, located between Auburn and Opelika, is at about the midpoint on the Robert Trent Jones Trail, which runs 380 miles from one end of the state to the other.  Grand National is a 90-minute drive from Atlanta, a straight shot down Interstate 85.  Those who make the journey will find a taste of the consistent quality I found at the three multi-course complexes I visited on the Trail a week ago.  On the other hand,

Greens were firm and fast, and front pin positions were impossible to get close to.
housing to attract the valued retirement crowd still has a ways to go.
Grand National's Lake Course was the first I played on the Trail.  It turned out to be in the best condition of all, which is not a slam on the others but rather is praise for Grand National.  Like the other courses, the fairways were over-seeded to a vibrant green, a nice contrast with the brown rough.  The fairway grass was tight, and I found myself rolling the ball over just once during my 18 holes (I landed in someone's unfilled divot, and since I wasn't playing a match, what the heck).  The greens, the only ones during the week that did not show evidence of recent aeration, were firm and fast, and when pins were up front they were impossible to get close to.

Like other greens on the three courses I played, these were elevated, some significantly so, and the firm surfaces made me play cautiously to avoid too many lob wedges up too many steep slopes.  The greens were large, sloped and well protected by steep bunkers, as well as the slopes.  Grand National and the other courses I played are all about positioning on the approach shot.  Landing zones off the tees were generous, although some sported the traditional Jones bunkers -- not huge, like a Palmer's or Fazio's, but definitely in play.
The 600-acre Lake Saugahatchee dominates the 54 holes at Grand National and comes into play or into view on 32 of them.  Unlike Oxmoor Valley, near Birmingham, which I also played and enjoyed greatly, the terrain at Grand National is kindler and gentler and a lot easier walk from the cart paths to my errant shots (because of recent rains, I played cart path only the entire week).  Grand National is a course you could grow old playing,

You could grow old playing Grand National with the array of tee boxes available.
shifting tees every few years as length off the tees begins to fade.  Indeed, all the Jones courses offer those multiple teeing options.
I chose the mid-level orange tees for my round at Grand National's Lake Course, a pleasurable 6,500 yards that plays a little shorter than that if you snuggle some of your drives near the crooks of the 10 doglegs.  The back tees, at over 7,100 yards, are only for the low-single-digit player.  The white tees, at less than 6,000 yards, will appeal to the 15-handicap player and higher, as well as to those who can't bang the ball 200 off the tee.
The opening hole at the Lake Course is a stunningly good starter, visually beautiful and a faithful introduction to a thoughtfully designed and challenging layout.  At just 364 yards, the hole is short but demands strategy; a large fairway bunker guards the left crook of the dogleg 220 yards from the tee box, and a drive just short of the sand leaves an approach of 130 yards to an immense, double green that is shared with the 6th hole.  You can take advantage of some generous fairway to the right of the fairway bunker, but the following wedge shot will have to carry almost entirely over water to a firm and fast green.  The two-tiered green is protected by a bunker at front left and by water at front right.
The par 3 3rd brings the lake directly into play.  The 175-yard tee shot is all carry over water to another large green protected by the water front and left and pot bunkers at front right and back right.  Hidden from the tee is a severe slope between the two pot bunkers on the right side; any chip shot

from there, especially on the firm greens, risks rolling off the other side and down toward the water.  The hole provides just a hint in advance of the par 3 15th, the Lake Course's signature hole, which is do or die over water to an island green from more than 190 yards away.
A Marriott Hotel and Conference Center is a magnet for visiting golfers and built in marketing to those who might want to live permanently near 54 holes of golf.  For those planning to stick around for a couple of days of golf, there really is no other good alternative within 15 or 20 minutes; and if you and the guys plan to go into Auburn and hang out of an evening at one of the local bars, make sure you have a designated driver. (Better to just hang out in the Marriott's own ample watering hole and leave the Auburn pubs to the older university kids.)  The room rates at the hotel start at $109, but golf packages are available.
Before my round at Grand National, I stopped at the brand new community called National Village, inside the gates of the 1,300-acre Trail property but about a mile from the golf course.  The community is a joint project between a local developer and the Retirement Systems of Alabama, which manages more than $20 billion in assets for the state's employees and teachers.  The RSA funded the construction of the 26 courses on the Trail with an idea to attract not only golfing tourists but also retirees (I'll have more to say about the history of the Trail in a few days).

More than two-dozen single-family homes were in various stages of construction at National Village, including a few that are just about ready for occupancy, but it was hard to see how the community fits the strategy to attract retirees.  Wonderfully appointed yet close to each other on quarter acre tracts, at $600,000 to $800,000 they seemed overpriced for the Auburn/Opelika area.  Elsewhere in the southeast, such prices will fetch a home on a ½ acre with nice views of a golf course, if not water or mountains, in a gated community with a private golf club.  The RSA and the developer do have plans for lower-priced homes closer to the golf course and for a town center, with villas, near the hotel and conference center.  That could be the spur to attract more golfing retirees to the area.
For now, the developers might want to consider lowering the prices at National Village to encourage some quick return on their investment in the already-built homes (none had been sold by the time of my visit).  With a university town nearby, a no-hassle drive from Atlanta, and 54 holes of excellent golf just down the road, their community has the ingredients for success.

Ratings for Grand National Lake Course
I rate elements of the courses I play on a scale of 1 to 10, with 10 being "perfection" and 1 "avoid at all costs."  "Playability" is my assessment of how players of all capabilities might enjoy the course. 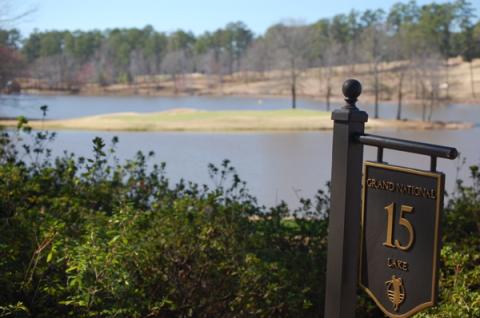 The Lake Course's signature hole is the par 3 15th with its island green and no bailout.

More in this category: « Impressive par 5 gives taste of Jones' Silver Lakes Happy Trail: 18 courses more for $125,000 less »
back to top
Back to Top